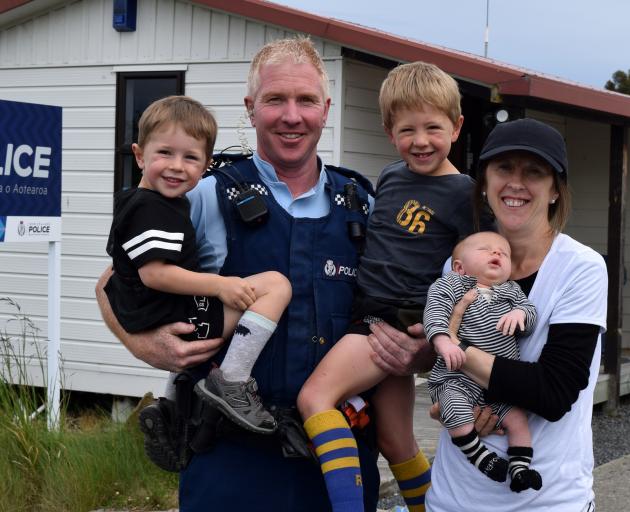 The sole police officer in Middlemarch is enjoying village life after celebrating a year in the job.

Constable Allan Lynch, of Middlemarch, celebrated his first year working in the South in September.

He and wife Kirsty and children Richie (5) and Ollie (3) moved from Feilding in the Manawatu to Middlemarch.

The family welcomed son Fergus about a month ago.

The family were enjoying being part of the tight-knit community in Middlemarch, he said.

‘‘It takes a village to raise a family and everyone here helps everyone out.’’

Const Lynch plays for the Strath Taieri Rugby Club and was a member of the Middlemarch Volunteer Fire Brigade.

When the Taieri Times visited his home next door to the station, he was playing with his children and their friends, driving a ride-on lawnmower, which was towing a sled for the children to ride.

He felt his family had arrived in Middlemarch at a good time, as many families in the area had young children, he said.

‘‘The community is looking pretty good for the future.’’

One of the main differences in policing in Middlemarch was there was more time available to spend on a job.

‘‘Where I was policing, you felt like you were putting a plaster over everything, where down here you can follow things through a bit more as you’re not rushing from job to job, to job, to job.’’

Down south, you could deal with a situation, which stopped it becoming a bigger problem in the future.

Up north, he dealt with more incidents of domestic violence, and ‘‘high-volume crime’’ where here there were issues such as unlawful hunting, or goat rustling.

The long-term plan was to stay working in Middlemarch.

‘‘As long as I’m still doing a good job and I hear no complaints, I’ll stay around.’’