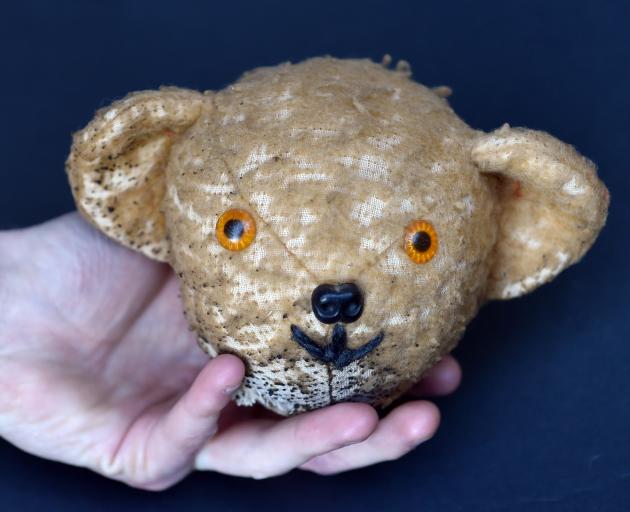 The missing head of Play School soft toy cast member Little Ted has been found, but the location has to remain a secret. Photo: Peter McIntosh
Little Ted’s head has been found. But a reunion with its body appears to be well off the cards.

The Play School character’s head has been missing since 1989 when the small teddy bear was unceremoniously blown up as part of the wrap festivities at the end of the beloved children’s series.

The Dunedin man who owns the missing head was located after a long investigation by Hayden Donnell, of The Spinoff, which involved talking to many people involved in the Play School world at the time.

Little Ted’s body is at Toitu Otago Settler’s Museum along with the other soft toy members of the Play School cast, but the location of the little bear’s head had been an ongoing mystery.

That mystery was first sparked in 2009, when the Otago Daily Times received an anonymous call from a man claiming to own the head, but he did not provide further information.

When spoken to by the ODT yesterday, the man said he kept the head a secret because the mystery was more exciting than having the head in a museum.

The bear was one of the multiple copies of Little Ted and was rigged to explode as part of a prank on the director, Frances Neill-Weston.

The owner of the head was a production staffer who rigged the bear to explode.

He unstitched and removed the bear’s head from its body and planted a film canister full of gunpowder in the neck. He then attached the cap to the bottom of the head, allowing it to connect to the canister in the body.

When he detonated the charge the head popped right off, he said.

He did not understand why so many people cared about finding the head, but was happy to keep the mystery alive.

"If I’d given up the head, in a few years nobody would be interested. It’s just a teddy bear with a few singe marks."

The mystery had been quite a bit of fun, he said.

He did not want any trails leading back to him, and said he told Mr Donnell that if he was identified in the story then he was "quite likely to take the head out the back and bury it".

He did not trust museums and declined offers from museum director Cam McCracken to buy it.

The head was the only keepsake of a 47-year radio and TV career.

He was receiving ongoing treatment for cancer, his family members were overseas and the disembodied head was his "most enduring companion", The Spinoff article said.

“He’s one of the family here. There’s only him and me,” he said. "I see him every day and look after him. He peers down at me every day."

He had made plans with friends and family for the secret ownership of the bear’s head to continue after his death.

"Poor Ted, he’s turned into quite the little troublemaker."

Mr Donnell said the hunt for Little Ted’s head was exciting, but the head should be preserved for everyone to enjoy.

"I get it means something to him, but the bear also belongs to everyone who watched the show.

Although he had spent a month searching for the head, he agreed to keep the location a secret.

"I hope when I die my head is buried with my body," Mr Donnell said.

You're entitled to a keepsake.
I got a PABX telephone desk, complete with patches, from which incoming calls were connected. Bit useless, really. Good luck to the bloke. It was a good show. Old DNTV2, producer of Network product.