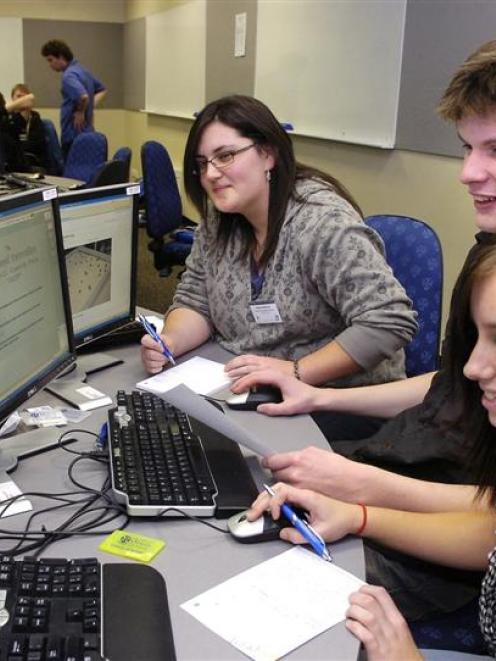 Cromwell College pupils (from left) Cheyana Wilkinson (18), Duncan Pacey (17) and Katherine Aitken (17) explore the use of computational intelligence to program a swarm of robots to clean up oil spills. Photo by Jane Dawber.
Imagine this: a swarm of tiny robots scooting around containing and collecting spilt oil in the Gulf of Mexico.

Sadly, it is not a reality. But it was an application Cromwell College pupils Katherine Aitken, Duncan Pacey and Cheyana Wilkinson devised for "computational intelligence" at the recent 2010 Otago Technology Innovation Challenge in Dunedin.

The emerging technology is an offshoot of artificial intelligence, and is one of several new computer-related technologies being researched at the University of Otago information science department.

The other technologies for which the pupils found applications were location-based mobile augmented reality (overlaying computer-generated imagery over real-life images), and telerobotics (micro-computers with communications abilities).

About 25 secondary-school pupils from around Otago competed in the event, which challenged them to develop innovative applications for the technologies.

The day concluded with teams of pupils presenting their applications to a panel of judges in a three-minute "elevator pitch", similar in style to the television show Dragon's Den.

Since it was established in 2007, it has been expanded to schools in Wellington (in 2009), and this year it will also be held in Auckland.

"Our main goal is to expose students to emerging technologies currently being researched by our department.

"By incorporating a business challenge aspect to the event, it makes students think seriously about new, innovative uses for those technologies."