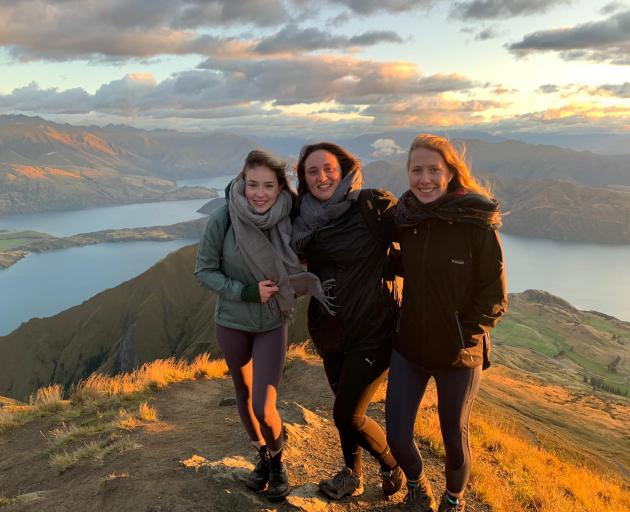 Emma Forster (18), Nele Heins (19) and Sarah Fischer (18) are German au pairs in Dunedin waiting to catch a flight back home. PHOTO: SUPPLIED
Three German women in Dunedin are on stand-by for a lifeline — a flight home.

Emma Forster, Nele Heins and Sarah Fischer have been working in Dunedin as au pairs, and until last week thought they would remain in the country to work and then travel.

Now, they are on a list of more than 12,000 Germans in New Zealand subscribing to a German repatriation programme announced on March 16, and hope to get home before international borders close because of Covid-19.

Miss Fischer had planned to finish her job with a Dunedin family on April 1, and had bought a car to travel the country until June.

Instead, she was in her host family’s home in Dunedin on stand-by, having been informed by the Government she needed to be ready to catch a flight at any time.

“We ticked the option where they could give us less than 12 hours notice to get to Christchurch, which is where we believe the flight will leave from.

“We’ve been leaving our phones on loud just in case the text comes at 3am and we have to confirm we can make it.”

Miss Forster had been in New Zealand for six weeks, originally planning to stay until June.

“At first, my mum said it might be better to wait it out in New Zealand, where the situation was not as bad, but then the German Government said we would have until mid-April to get home and after that could not guarantee anything,” Miss Fischer said.

One of their host parents would drive the three to Christchurch when needed, she said.

Last week, the three booked a flight meant to leave today, but Emirates cancelled the flight.