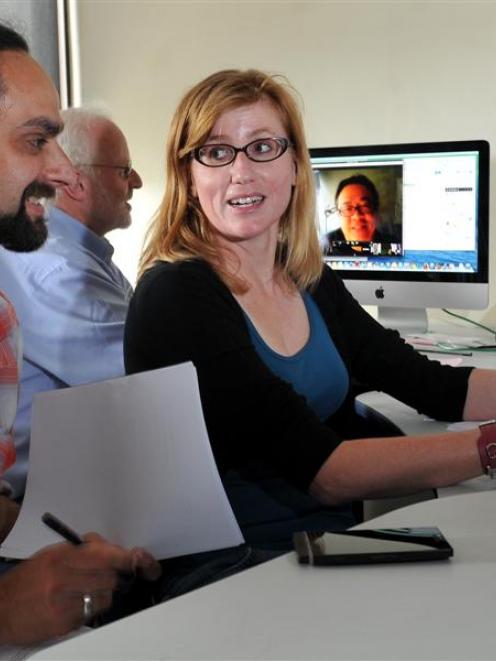 Richard White (left), Bernard Madill and Dr Erika Pearson continue work at the University of Otago yesterday on a project to write an electronic textbook. Photo by Craig Baxter.
Academics on both sides of the Tasman, led by University of Otago senior lecturer Dr Erika Pearson, have joined forces in an innovative project to create an electronic textbook in a single weekend.

The internet-linked project aims to break down barriers to education.

A related aim is to cut out the ''cripplingly high'' cost of textbooks that do not meet the local needs of New Zealand and Australian tertiary students.

The project, to produce an open access introductory text book for media and communications students, has also won a $5000 grant from the US-based international Creative Commons organisation, after gaining backing from Creative Commons Aotearoa New Zealand.

Much of the textbook was produced over the weekend during a series of intense 90-minute ''sprint'' writing sessions, followed by collaborative sessions, undertaken via internet, involving contributors at the University of South Australia, in Adelaide, as well as at Otago, Canterbury and Massey universities, and in Auckland.

The project is an experiment in the production of open educational resources in New Zealand, and participants are also preparing another work, a ''cookbook'' designed to help others with methods to tackle more free-access textbook projects in future.

Dunedin researchers were buoyed yesterday by receiving more than 100 comments on Twitter about the project from interested people, many of them overseas.

Some of the interest was sparked when Tim O'Reilly, a California-based backer of the free software and open source movements, retweeted to many of his supporters a message from a New Zealand internet commentator about the project.