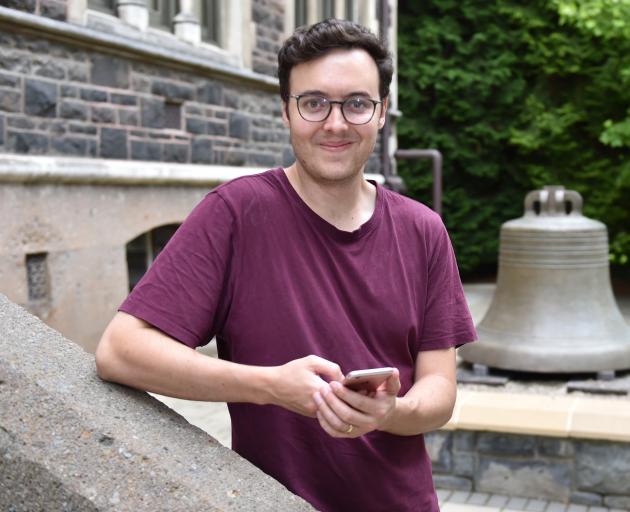 Former Dunedin student Benjamin Riordan with the University of Otago bell which is rung after doctoral theses are handed in. Photo: Gregor Richardson
Many first-year students heavily increase their drinking during Orientation Week, but research by former student Ben Riordan suggests cellphones can help encourage moderation.

Mr Riordan will graduate from the University of Otago today with a doctorate in psychology, based on his research on tertiary student drinking patterns, and innovative methods for reducing alcohol-related harm.

These days Mr Riordan is undertaking postdoctoral research in addiction medicine at the University of Sydney.

After flying in to Christchurch shortly after midnight yesterday, he and his wife, Jessica, and their child, Amelia (16 months), spent eight and a-half hours driving to Dunedin, arriving about 6pm. They had to cross the inland Arundel bridge over the previously flooded Rangitata River.

Mr Riordan’s PhD thesis is titled ‘‘The rabbit hole before Wonderland: The nature of university students’ alcohol use during the transition to university’’.

For new students, university could be a ‘‘wonderland of opportunity’’, he said.

The first few weeks at university were ‘‘typified by change, stress, and uncertainty’’.

A student’s first few weeks on campus also presented ‘‘an important yet understudied opportunity for alcohol misuse prevention’’. His study showed many Otago students drank about 35 drinks or more during Orientation Week.

His study showed there were bright prospects to intervene and encourage more moderate drinking during Orientation Week, partly by using ‘‘Don’t be a dick’’cellphone texts.

‘‘The idea is, if we can help them through the first week when they’re drinking a heap, once they get to know the place a bit better they’ll probably be OK,’’ he said.

Mr Riordan undertook five separate studies, including about 2000 Otago students, starting in 2015, during his research.