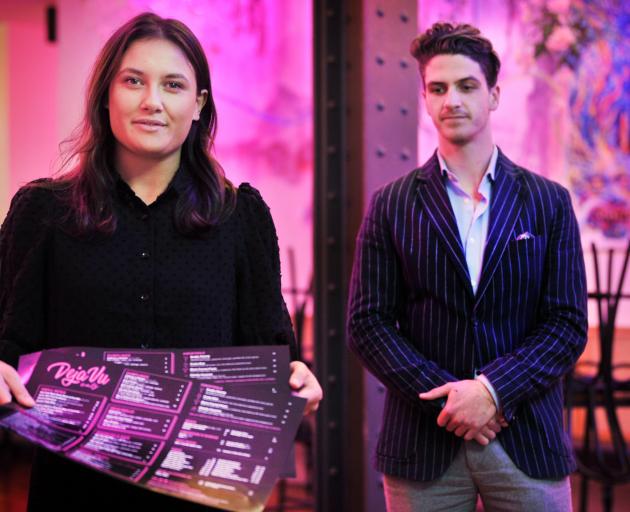 Hoping to reopen Deja Vu restaurant in July are Prohibition Smokehouse bar manager and Deja Vu restaurant manager Rebekah Rolleston with group manager Max Gillies. PHOTO: CHRISTINE O’CONNOR
While many are back in business following Covid-19 closures, some Dunedin establishments will remain shut in an act of self-preservation.

Reading Cinemas in Dunedin welcomed movie-goers back yesterday with physical distancing and changes to its screening schedule.

It was screening a mixture of new and older movies.

"The reopening of Rialto Cinemas is dependent on both the global film releases and alert level restrictions and how they apply to cinemas, but it is hoped we may be able to reopen Rialto Cinemas in June.

"We will make further announcements about a formal reopening date soon."

However some businesses across the city would remain closed.

Business owner Andre Shi said his restaurant Deja Vu, which opened last September, would remain closed in order to focus on his other businesses Vault 21 and Prohibition Smokehouse.

It had been "a very tough time" for hospitality, with "a lot of uncertainties", he said.

"We have had a bit of a financial crisis, so we have had to adjust."

Revenue across the board was about 40% of what it had been at the same time last year, he said.

His fourth Dunedin business, Catacombs nightclub, planned to reopen for the first time since March next week, if Alert Level 1 was introduced.

Thirteen staff across his businesses had been made redundant, a series of "very difficult decisions".

It was hoped Deja Vu would open again in July, with some adjustments to ensure it remained viable, Mr Shi said.

"We are trying to be optimistic about it all, and hope to get back to where we were at some stage."

Businesses that have the courage and sense to delay operations will be patronised out of gratitude.