'There was no road under the wheels' 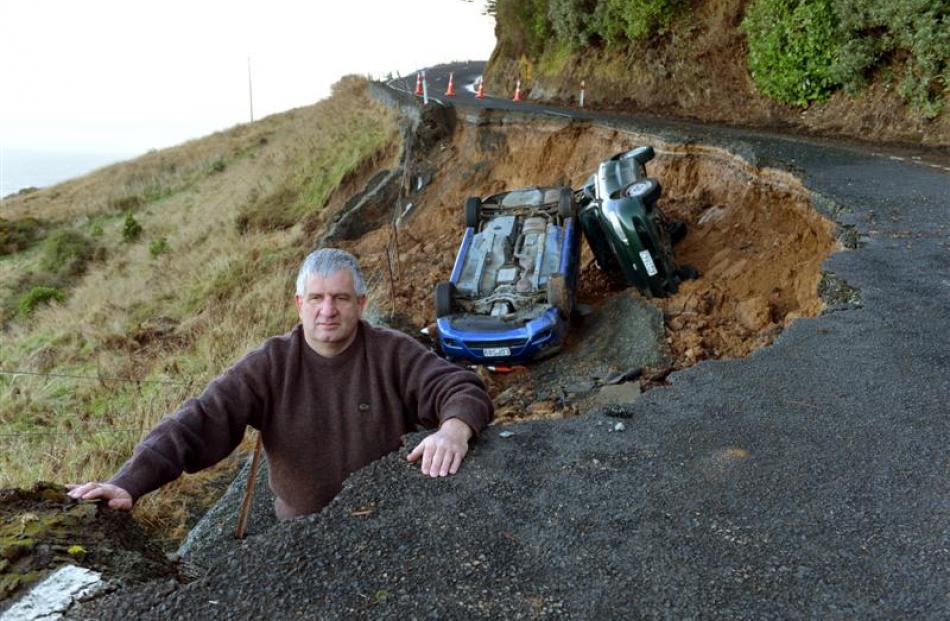 Barry McCone climbs out of the hole that claimed his Ford Falcon (left) and another vehicle during Wednesday night's flooding. Photo by Stephen Jaquiery.

A Dunedin man who drove into a gaping hole in Highcliff Rd says the road in front of him just disappeared.

Barry McCone (55) was left trapped in his upside-down car, unable to open doors or break a window to escape, after crashing on his way home during Wednesday night's deluge.

But he was not alone for long before a loud bump signalled the arrival of a second car, which came to rest next to his vehicle after also plunging into the hole.

Mr McCone said yesterday he was shaken, stiff and nursing a cut finger, but otherwise unhurt following the accident.

But, asked how the accident unfolded, Mr McCone said: ''I wish I knew.''

''One minute I was driving and the next minute the car was sort of starting to tip over.

''I thought I'd slid in the water or something, but it wasn't that,'' he said.

''It was just that there was no road under the wheels.

''It was all over before I knew what was happening.''

Mr McCone said he was travelling slowly, about 30kmh, in ''miserable'' conditions, when the crash happened about 6.30pm.

In the tumble, his car dropped into the hole, tipped over and came to rest on its roof, next to a steeper drop.

''That was probably the first thought that went through my mind - 'God, I hope I stop rolling before I reach the bloody drop'.''

Mr McCone said he was alone in the hole for ''two or three minutes'', with no cellphone reception and unable to escape from his car, just 400m from his home in Seal Point Rd.

He sounded the horn and left his headlights on, hoping someone might see the beams and raise the alarm, before help - in the form of a second car - crashed down into the hole beside him.

Mr McCone did not immediately realise what had happened, but heard voices shouting from the darkness that they were going for help.

The voices belonged to Prof Graham Wallis and his son, Jonathan (21), who were returning from the University of Otago when they crashed into the hole.

Prof Wallis told the ODT he was ''just aware of falling and you're on your side'', but the accident could have been ''so much worse''.

They managed to climb out of their car, and Prof Wallis said after initial silence, he eventually heard ''rapid knocking and shouting'' coming from Mr McCone's car.

Prof Wallis and his son left to raise the alarm with a neighbour, who returned to the hole armed with a hammer to smash Mr McCone free.

Prof Wallis said Highcliff Rd was ''so badly damaged'', with numerous slips, including the one that claimed his car.

''It's going to take a long time to get round to fixing.''

Despite that, he considered himself ''really lucky'', given what was happening elsewhere in the city.

''I'd much rather what happened to me [on Wednesday] than go through what the people of South Dunedin are going through.

''That's something that lasts a long time.''