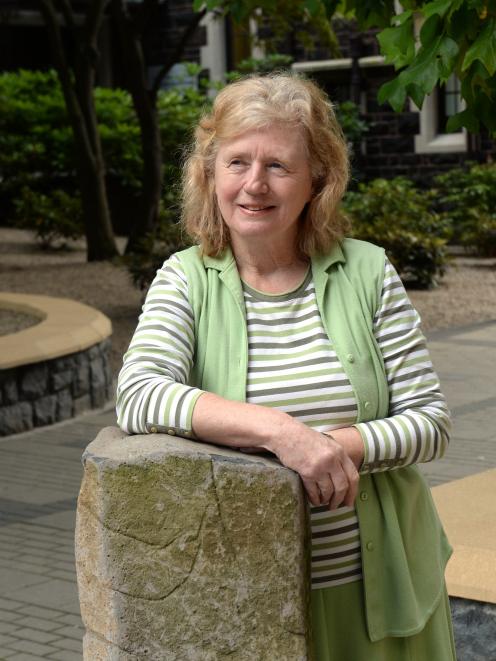 University of Chester geo-conservation chair Prof Cynthia Burek says more stories about successful women scientists need to be told. Photo: Linda Robertson.
Girls are being put off  careers in science because the stories of women scientists are going untold, a visiting academic says.

University of Chester geo-conservation chair Prof Cynthia Burek spoke about the topic in Dunedin this week after she had been invited by the Otago branch of the New Zealand Federation of Graduate Women.

Her research showed there was a lack of public knowledge about women scientists and she believed a lack of role models was putting girls off  pursuing careers in science.

Her interest in the area started after she participated in a conference down in the Canary Islands.

"I rather stupidly said I’ll look at the history of women in geology thinking that there will be loads of stuff and when I got back to the United Kingdom I found there wasn’t anything."

This eventually sparked a project to find out what the public knew about women scientists.

She found that when asked to name 10 famous female scientists most people struggled to name more than a handful.

Scientists, educators and the media had a role in changing this and telling more stories might make a career in science seem a better option for girls.

The one woman who transcended the gender barrier was Marie Curie, who was among the most well known even when members of the public were asked to name scientists of both sexes.

Now Prof Burek wanted to find out what made Curie, who carried out pioneering research into radioactivity and is the only woman to have won two Nobel  prizes,  so well known.She believed this could help when telling the stories of other women who made major contributions to science.

Prof Burek was also here to talk about "geo-parks" which protect areas of global geological significance.

Geo-parks were given Unesco recognition in 2015. Prof Burek said New Zealand was an ideal candidate for creating them.

Three woman scientists who should be better recognised:

• Primatologist Dian Fossey (1932-85) who studied mountain gorillas and was murdered while researching them in Rwanda.

• Rosalind Franklin (1920-58) who made a major contribution to the discovery of the structure of DNA.