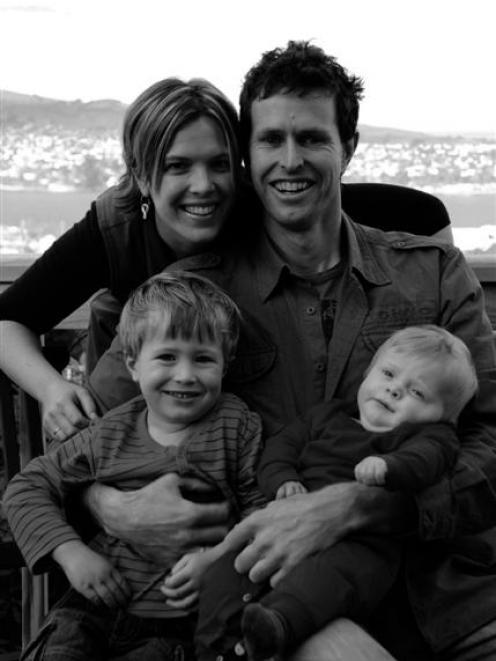 Mother Nadia McKenzie and father Tom Casey with Ben (left, then 3) and Mac (9 months). The photo was taken in May, 2010. Photo supplied.
The parents of a Dunedin toddler who died on the way to participating in research in the United States on his rare metabolic disorder say they are proud they made the last months of their son's short life special.

Mac Casey, who died on October 31, aged 14 months, had infantile Krabbe disease, a metabolic disorder with a grim prognosis.

Lacking an enzyme for forming the myelin sheathing needed for nerve insulation, a suffererhad an average life span of 13 months, and few lived beyond 2 years. The disease affects one baby in about 100,000.

Mac's parents, Nadia McKenzie and Tom Casey, say battling a rare disease is especially difficult in New Zealand, where doctors are less likely to have seen or treated them.

Her second son was a "terrible feeder", suggesting reflux, and he was treated for the common ailment.

From the age of 6 months, she realised her baby was losing skills he had acquired, and again sought help.

Gaining access to a paediatrician was easier because their son was taking part in the University of Otago's prevention of overweight in infancy study.

Told they had reason to be concerned about their son - it took two months to get a firm diagnosis - it was hard to believe their then 10-month-old had a fatal disease, Ms McKenzie said.

His intense suffering was apparent, however, and even cuddling him his parents had to be careful because of nerve pain.

Advice from a paediatrician at North Carolina University, contacted through the internet, was invaluable in making the rest of their son's life as comfortable as possible.

While pointing out she did not intend it as a criticism, Ms McKenzie said the lack of exposure to rare diseases in New Zealand made things tougher for parents.

None of the doctors Mac saw in New Zealand had seen Krabbe disease.

At a time the family was making Mac's remaining life as special as possible, his parents had to focus on relieving his pain, and fighting for the best pain management.

They are proud that a trip to Auckland, and Hanmer Springs, and a special first birthday party, all featured in his final months. Four-year-old brother Ben was "fabulous" and there "through it all", Ms McKenzie said.

Following surgery for Mac's feeding and reflux problems in September, the family was able to travel to the United States.

Research into stem-cell therapy has shown promise for Krabbe disease, and synthetic enzyme replacement was a possibility in future. Early detection was crucial for treatment, and in the United States Krabbe disease had been added to the newborn testing schedule in three states.

It was unlikely New Zealand, with its small population, would have newborn screening, at least in the foreseeable future.

Mac would have been clinically observed, for a week, for two Krabbe disease studies under way at the University of North Carolina.

The family was participating in the hope of learning more about his illness for pain relief, and to contribute to Krabbe disease research for future generations.

On a stopover with friends in Los Angeles, on the way to the university, Mac became ill with a bacterial infection and died.

In an ironic twist, the last doctor who examined him while in the United States was the first they had met who had seen Krabbe disease before, Ms McKenzie said.

Upon arriving home, Ms McKenzie discovered she was carrying her third child, and the baby, who had a 25% risk, tested negative to Krabbe disease.

While "bittersweet", the family is excited and looking forward to the baby's arrival in July.

They had been overwhelmed by support from colleagues at John McGlashan College and Anderson Lloyd, friends and family, and also thanked Air New Zealand for its support.