Tommy has been there, eaten that 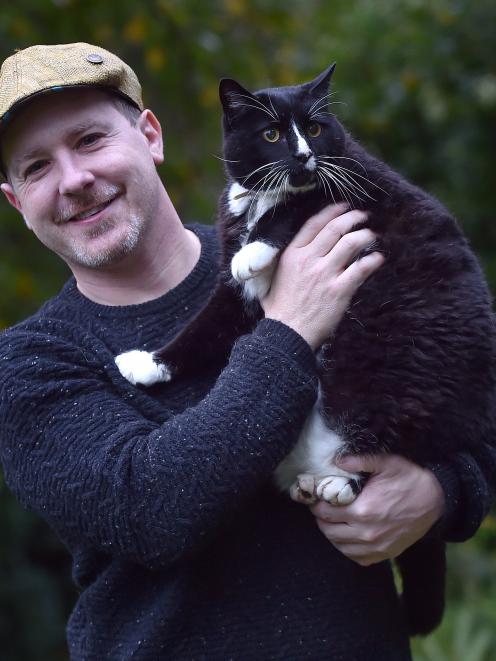 Jesse Bering holds his cat Tommy, who has lived with him in the United States, the United Kingdom and New Zealand. Photo: Peter McIntosh.
Tommy the cat has seen a thing or two.

The globe-trotting tom is enjoying life on Otago Peninsula after living on the other side of the world, including as a stray in the Ozark mountains and as an adolescent in the alleys of Belfast.

''The thing that made me decide to get a cat was I left my log cabin in Arkansas one morning with the sink full with dirty dishes in water.

''I came home and there was a dead rat in the sink.

The bicolour tom with a ''terrible meow'' quickly became more than a mouser and when his psychologist owner got a job as a reader at Queen's University in Belfast, Ireland, he went, too.

To reduce the time Tommy would need to spend in quarantine for the trip, he spent six months in San Francisco first.

When the cat was eventually flown to Ireland ''he was so loud you could hear him through the cockpit''.

In 2011 the feline flew to Ohio, and then eight months later he moved to the secluded streets of upstate New York.

In 2014, Prof Bering accepted a job in the University of Otago's Centre for Science Communication.

The reputation of the university was important, however New Zealand's relatively short quarantine period was also a deciding factor in the move across the world, Prof Bering said.

''It's only two weeks here. That was one of the reasons we decided to come here.''

By the time of the move, Tommy had been joined by two dogs, and Prof Bering and his partner drove them across the United States to cut down their time on flights.

''Actually, it was a really long trip.

''We rented a car, put all our stuff in it and the animals and drove from New York to Los Angeles.

''It was a long trip because we never got far without a toilet break for one of the animals.''

He had spent ''thousands'' of dollars moving Tommy, but said it was worth it.

''We have this unspeakable bond. He's my friend and I think people see pets as dispensable too often, especially with travel.''

Since arriving in Dunedin Tommy had changed his hunting to suit the environment, Prof Bering joked.

''He's doing what is good for Otago and catching pests.''