Top All Blacks passing it all on 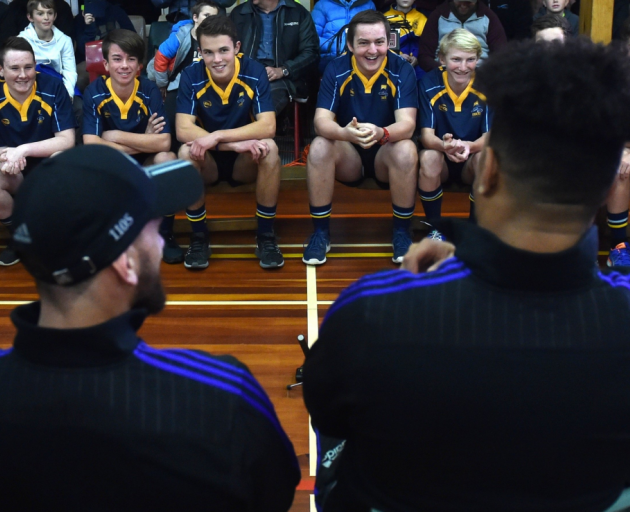 Members of the Taieri College under-15 rugby team put questions to All Blacks, including Aaron Cruden (L) and Ardie Savea, at the school gym last night. Photo Peter McIntosh

There may have been a bit cramped for room but Taieri College pupils relished the opportunity to test their skills against some of the All Blacks' best at the school yesterday.

The school's under-15 rugby team mixed it with six All Blacks, including captain Kieran Read and Highlander Elliot Dixon, after the team won a competition to host the national side while it is in Dunedin for this week's third test against Wales.

During a question-and-answer session before the rugby balls were thrown around, the 22 school pupils learned Dixon was a keen volleyballer and athlete at high school, while Read would probably be a physical education teacher were he not a professional rugby player.

Prop Faumuina said he looked up to former Highlanders front-rowers Carl Hayman and Kees Meeuws when he was growing up, and Ardie Savea said it was surreal to be in the All Blacks environment.

With talking done, the players ran through some drills, which included groups of three or four trying to run through three lines of All Blacks defence.

Several players dotted down, although the All Blacks may have been taking things a tad easy.

Read and Cruden offered some advice before the players engaged in a game of touch, which ended in controversy when Savea chipped ahead for one of his team-mates to score.

It was all in good fun, and afterwards the starstruck players lined up for autographs and photos with the All Blacks.