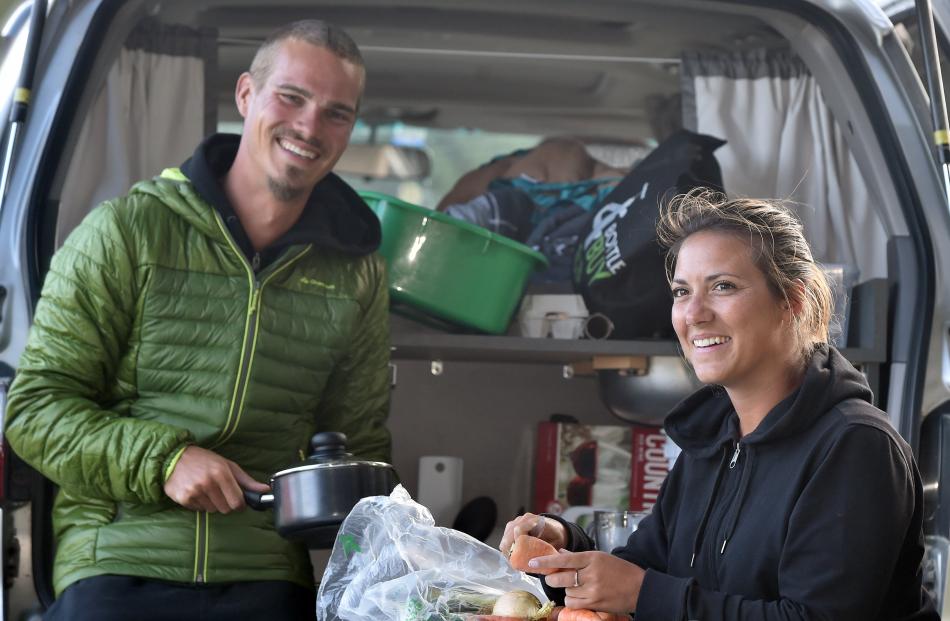 Freedom campers Mathilde Straebler (28) and Kevin Guay (27), both of Paris, are planning to spend money on Dunedin’s tourist attractions. Photos by Peter McIntosh 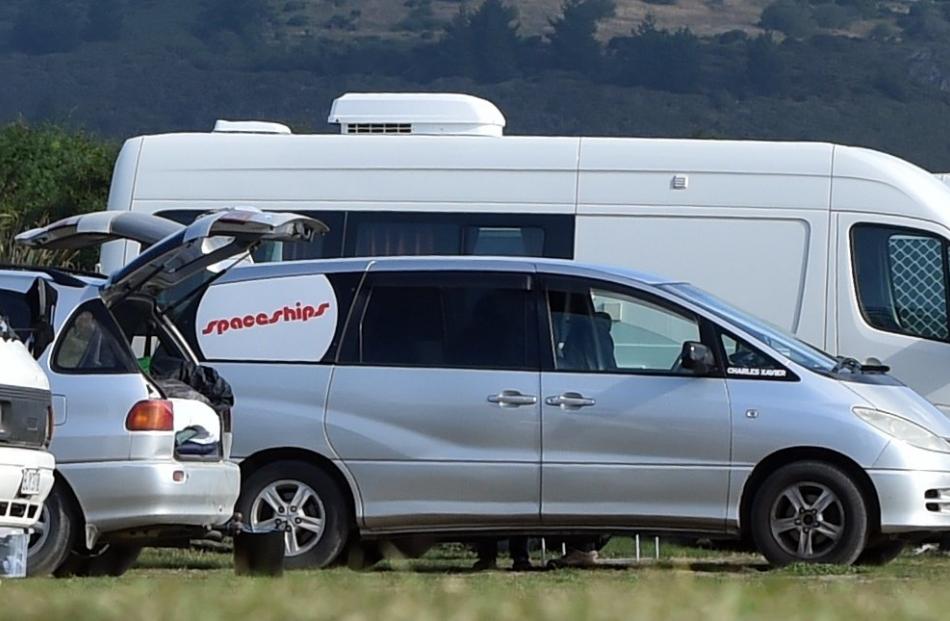 Campers pack up for the night at Warrington Domain's freedom-camping site. 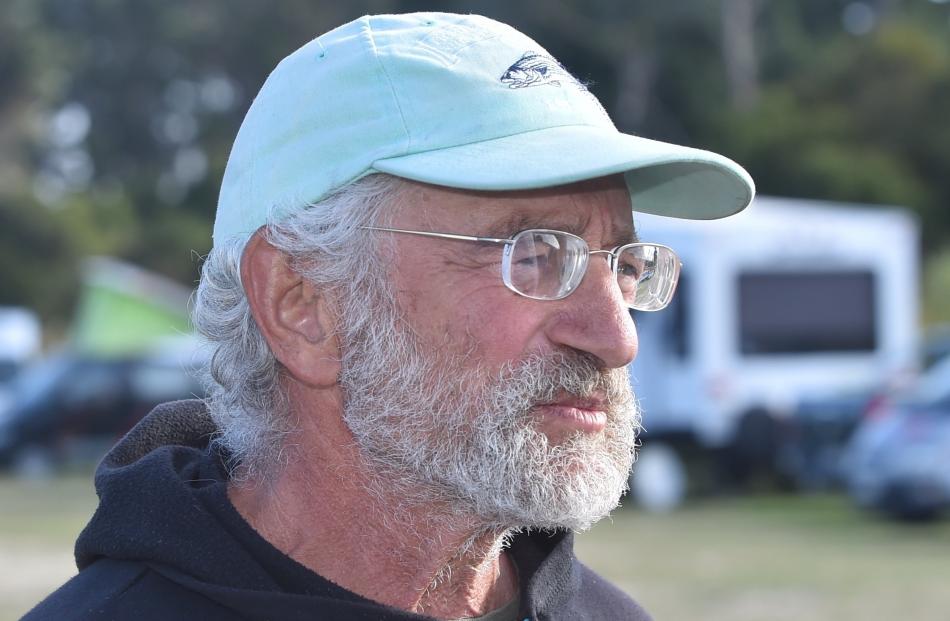 Retired Massachussetts doctor Edward Sussman said more than anything else he wanted to thank Dunedin for providing the domain to freedom campers.

Freedom campers have been copping flak from some Dunedin residents. They have been accused of leaving human excrement in sand dunes and adding no money to the local economy. Reporter Craig Borley went to Warrington Domain's freedom-camping area to hear the campers' side of the story.

Dozens of vehicles sprouting washing lines and pillows lined the Warrington Domain when the Otago Daily Times visited this week. The camp was neat, clean, quiet and friendly.

But there was a problem, the campers said. Freedom camping was a ‘‘thing'', an increasingly popular thing fuelled by a demand for adventure and human interaction - and helpful phone apps. The more capacity and amenities provided, the less it would impact on locals, they said.

For American couple Edward Sussman, a 71-year-old retired doctor, and artist Dana Nunes (59), freedom camping was not a financial necessity but resulted from a desire to experience New Zealand in an intimate way.

In the midst of a three-month tour of the country, the couple said they felt incredibly grateful to Dunedin for providing the Warrington site.

While they were aware of some negative local sentiment, their experience was that freedom campers respected the areas provided for them and spent lots of money. They just didn't spend that money on accommodation.

The couple could have stayed in New Zealand's most expensive hotels but chose not to, they said.

‘‘This is more fun. When you go to a fancy hotel, you never meet anybody. Who do you meet? The bellboy?

And camping for free or, when Department of Conservation camps were available, cheaply did not mean the travellers were not spending, he said.

The couple spent money on attractions, food and local art, which they sent back to their Massachussetts home.

French couple Mathilde Straebler, a 28-year-old accountant, and Kevin Guay, a 27-year-old hairdresser, said the availability of freedom camping determined whether they visited a town or not.

Using the WikiCamp app, which maps the country's freedom camping options, they were one week into a six-week tour in a hired campervan.

The van included a water tank, cooking equipment and beds but did not have a toilet or shower, they said.

For that, they depended on public toilets or, where available, Doc camping spots, which they said were fairly priced.

They spent money on food, petrol and attractions, including the Speight's Brewery tour and the albatross colony, which they would not be able to do if they were paying $40 a night for a piece of grass in a camp ground.

‘‘If there is no free camp, we don't come here. We don't come to your city. If we pay that every night, we can't travel.''

While the life of a freedom camper could sometimes stretch the boundaries of convenience, the pair had never resorted to defecating in the woods, they said.

Nor had they left litter anywhere other than in a bin. If bins provided at camping grounds were full, they kept their rubbish in the vehicle, they said.

‘‘This land is just beautiful so we don't want to ruin it.''

Inevitably, that strong impression of Dunedin would end up being shared with friends and family in France, they said.

Enterprise Dunedin director John Christie said the spike in freedom campers around Dunedin had come at a time when many of the city's accommodation providers were at capacity.

‘‘I think it's good for us. They do spend money, they do visit attractions. We know through i-Site staff that they are booking attractions.''

Freedom campers spent money on things like fuel and groceries, contributing to a different part of the local economy to traditional tourists, he said.

‘‘As long as they follow the rules, we absolutely do welcome them here.''

There was no question an influx of freedom campers could affect residents, particularly over peak periods, Mr Christie said.

But it was unlikely the rise of freedom camping would slow any time soon.

‘‘Really, we're going to see more and more. I can't see it changing. We're having these issues around the country, so it's how we manage it.''

One way to relieve pressure on existing areas was to add more freedom camping sites, Mr Christie said, something Enterprise Dunedin would be discussing with the Dunedin City Council over the coming months.

Mr Sussman offered his own suggestions for the Warrington freedom camping area.

He suggested a donation box and said most freedom campers would pay something towards their stay if they were given the chance.

More rubbish bins and more freedom camping areas would take the stress off the few now available, he said.

‘‘But the most basic thing I want to get across is just thank you.''

Research published by the Ministry of Business, Innovation and Employment in October 2012 looked at the commercial value of freedom campers to Dunedin.

Those visitors spent, on average, $195 a day in the city.

Cruise ship passengers made up 8% of Dunedin visitors, stayed less than eight hours and spent up to $125 a person, the research showed.

‘‘These economic benefits support the move to a more facilitative approach, focused on clear information, to achieve more sustainable outcomes for campers, local communities and the natural environment.''