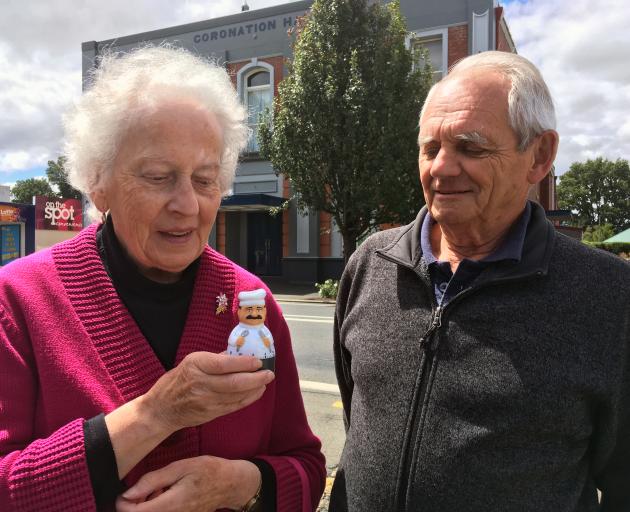 Margaret van Zyl and Ian Norris, both of Mosgiel, after speaking in a public forum in Coronation Hall last week. Mrs van Zyl used this timer to ensure she kept within the time limit. Photo: Shawn McAvinue
The Dunedin City Council giving Mosgiel residents ''putrid-tasting'' chlorinated water and ''toxic'' fluoride were discussion points at a recent meeting in the town.

Margaret van Zyl, of Mosgiel, set a kitchen timer for five minutes to ensure she stayed within her allowed time at a public forum at the Mosgiel-Taieri Community Board meeting last week.

She told the board she was concerned about fluoride being in the water supply of Mosgiel since its supply was switched from bore water in December.

Fluoride consumption weakened the ''skeletal structure'' of a person and increased the chance of broken bones, she said.

At a 2008 meeting, Mosgiel residents rejected a council proposal to introduce fluoride to the town's water supply.

''It is not the mandate of any council to mass-medicate the population of a town or city with a toxic waste product such as fluoride in the guise of dental health,'' she said.

After Mosgiel was switched to the town water supply in December, the '' foul-smelling and putrid-tasting'' chlorinated water had prompted her to have a water filter installed in her home.

The filter cost $240 and she wrote to the council requesting ''reimbursement of my outlay''.

''I have had no reply, not even an acknowledgement of my letter. For a council who advocate openness and transparency in dealing with the public, I find their attitude incomprehensible.''

After she finished speaking and the timer sounded, board member Maurice Prendergast said he shared her view on fluoride.

''Mass medication by poison is not acceptable,'' he said.

Ian Norris, of Mosgiel, also spoke during the forum, talking directly to Dunedin City Council 3 Waters group manager Tom Dyer, who was sitting among the board members at the meeting.

''Tom, read my lips - there is no need for the chlorination of Mosgiel water,'' Mr Norris said.

Board chairwoman Sarah Nitis told Mr Norris to address the board rather than Mr Dyer.

Mr Norris suggested the town be returned to bore water and technology introduced to detect if the bore water became contaminated, so the suburb could be switched to the town supply until the bore water was safe to drink again.

Later at the community board meeting. Mr Dyer said chlorine was necessary because it killed a substantial portion of ''microbiological contaminants'' which could harm people's health.

Following a recommendation by the Ministry of Health, aimed at improving residents' dental health, fluoride was added to the town water supply from Mount Grand, he said.