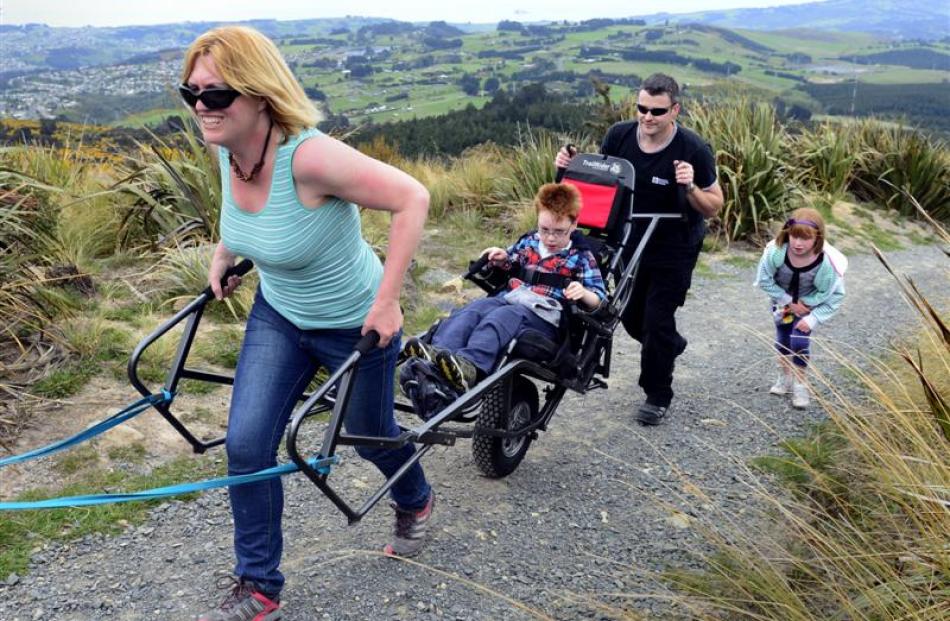 Dunedin mother Claire Casey navigates son Finn (9) up the Pineapple Track in the new TrailRider in Dunedin yesterday, with help from Shanon Arnold and his daughter, Isabella (7), from Dunedin. Photo by Peter McIntosh.

A new off-road vehicle that resembled a mix of rickshaw and wheelbarrow had a trial run in Dunedin yesterday, its first outing in New Zealand.

Halberg Disability Sport Foundation co-ordinator Bridget Meyer said the two TrailRiders arrived in Dunedin on Thursday and opened up a world of possibilities for physically disabled people in Otago.

The TrailRider would mean people with physical disabilities could get off the beaten track, and negotiate and tackle difficult tramps, she said.

The lightweight alloy vehicles were airfreighted from Canada so that physically disabled people could use them on an Outward Bound trip to Queen Charlotte Sound next week.

About 20 people turned up to take turns pushing the contraption, which had a single pneumatic tyre and disc brakes, she said.

The TrailRider was developed over a decade and had been proven in the world's toughest environments, including across swing bridges and up to the Mt Everest base camp, Ms Meyer said.

"They make the seemingly impossible possible."

Perpetual Trust provided funding for one, the foundation fundraised for the other, and both were community assets for the physically disabled people of Otago, Ms Meyer said.

Dunedin mother Claire Casey said she and her son, Finn (9), would not be able to enjoy the view from the peak of Pineapple Track without the TrailRider.

But now, walking holidays, such as undertaking the Kepler Track, were a possibility, she said.

Although Finn took some coaxing from his wheelchair into the TrailRider, he had enjoyed the journey and was all smiles when he made the summit, she said.