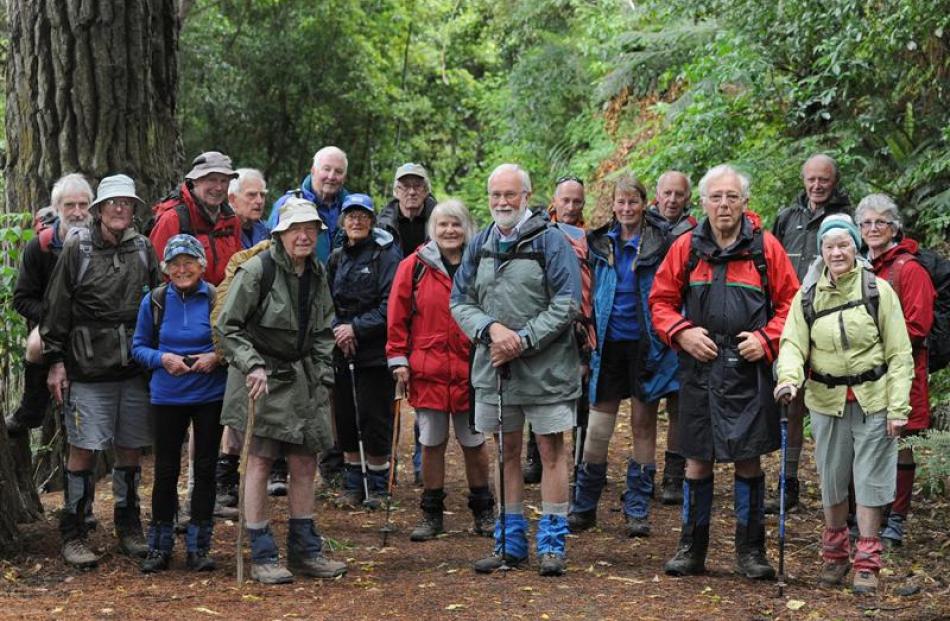 The Dunedin 60+ tramping club members on their weekly tramp in Dunedin yesterday, as they prepare for a trip to Coronet Peak. Photo by Craig Baxter.

Members of the 60+ tramping club in Dunedin range in age up to 84, but are ready for the challenge of Coronet Peak.

The club started 20 years ago and went on weekly tramps around Dunedin, he said.

"We like getting out into the countryside and bush, to enjoy each other's company, and it's good for your health."

Club leader Murray Bolt (82), of Dunedin, said every Thursday the group tramped on one of 50 public or private tracks around Dunedin.

"We haven't lost anyone yet."

Although there were a "few racehorses" in the group, they tramped together and set off for a six-hour loop from Booth Rd in Dunedin yesterday.

The group would tramp at Coronet Peak for the club's annual trip away next Monday, he said.

They would stay at the Otago Ski Club's huts for the five-day trip, which included three "big days" of nine-hour tramps, he said.

Club member Keith Paulin (83), of Dunedin, said he had been going to the annual "full on" trips for 20 years.

Graham Calder (72), of Dunedin, said he went for the good company and great food.

"The meals are better than we get at home."