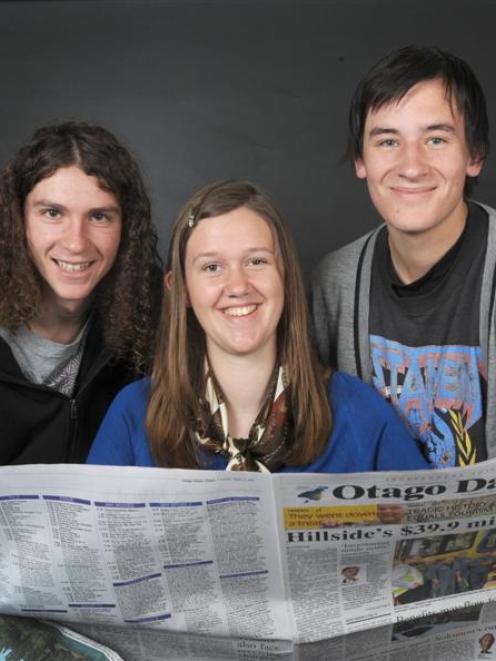 Nell Guy, Jeremy Thomson and Alec Dawson received New Zealand Qualifications Authority Scholarships in media studies recently and their marks placed them in the top 2% of exam candidates across the country.

Part of their exam focused on the New Zealand and global newspaper industry and they used the Otago Daily Times as a case study.

They looked at the demographics for the paper and how it has changed during the past few years with the introduction of the ODT online edition, special interest features to attract and retain readers, a newly revamped regional section, and a new editor (Murray Kirkness).

Jeremy said their studies showed more of Generation Y was being attracted to the newspaper because of these innovations, while it kept its identity as a conservative paper which was appreciated by older generations.

"Because it's online, it's so much more accessible. If you are a student, you most likely don't subscribe to a newspaper. But just about everyone has a laptop with access to the internet.

"A lot of us view newspapers as antiquated and outdated. The website is instant gratification and it's popular among young people."

Nell said the push to attract younger readers had been noted by people her age, but believed an avenue for input from secondary school pupils would be even more effective.

"We are investigating ways in which schools can become more involved in www.odt.co.nz," he said.

"This could include giving schools their own dedicated section on the site where they could publish school news, photos, events and pupil-generated content."

The trio also looked at the impact of the global economic conditions and how the independently owned ODT continued to keep all their subediting staff when other papers around New Zealand were laying staff off.

All three are "digital natives" and discussed how the younger generation accesses news and media quite differently to older generations, and the challenges that presents mainstream media products like newspapers.

Despite the technical advances in presenting the news, Nell said she still enjoyed reading the paper copy of the Otago Daily Times rather than the website version.

"You tend to read stories that you wouldn't normally read in the newspaper. Whereas with the internet, it's easy to pick and choose the stories you read.

"But my environmental conscience still prefers to read online. When you buy a paper, you read it for an hour and then it's useless. It becomes rubbish unless you use it to light the fire or wrap up fish and chips."

Nell said pupils in the Logan Park High School media studies class have had the benefit of the vast experience of Otago Daily Times regional news editor Dave Cannan who had visited the class several times during the past two years, giving a valuable insight into the paper, its production and editorial decisions.

It was the most valuable part of the course, she said.

"He was so insightful, honest and open. His answers were so clear and direct.

"The workload was a surprise to us - the back-to-back hours. It seems like a 24/7 job. The paper never seems to sleep. It's not like what you see on television sitcoms."

While Nell and Jeremy were rapt with their scholarship awards, Alec was even more so.

He won the scholarship despite not actually taking the media studies class.

"I did go to the tutorials but I wasn't entered into the subject at NCEA level 3.

"That's the beauty of scholarship exams - you can sit them without taking the subject."

Alec says he was inspired to sit the exam because he was passionate about film studies, English and journalism.

"It was almost an extra-curricular subject for me."

All three are now in their first year of study at the University of Otago and have ambitions of forging a career in the media industry.

Logan Park High School pupils received 17 NZQA scholarships (one of which was an Outstanding Scholarship) across a variety of subjects including chemistry, physics, calculus, statistics, English, photography and German.

• Any schools interested in contributing to www.odt.co.nz can email sean.flaherty@odt.co.nz