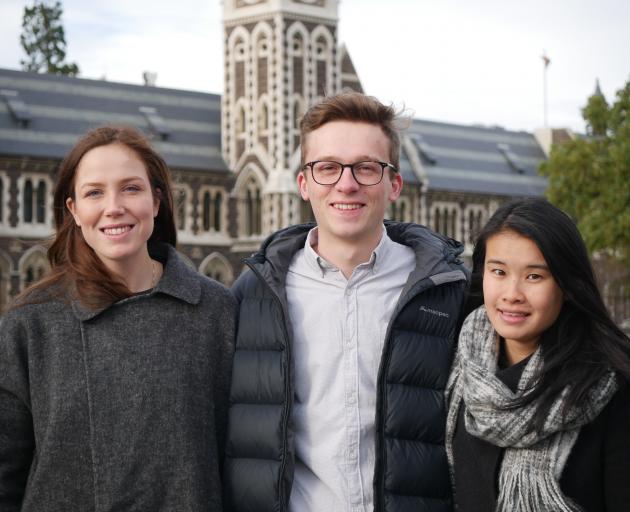 University of Otago students Rebecca Good (23), Nick White (22) and Carolyn Ding (22) will head to Canada tomorrow to compete in the World's Challenge Challenge.

Hosted by Western University, in London, Ontario, from June 3-8, the event invites teams from around the world to give a seven-minute presentation, followed by a three-minute question time, about their solution to a world issue.

Miss Good, Mr White and Miss Ding comprise one of 15 teams which had to select a United Nations sustainable development goal, identify a world issue and come up with a solution to it.

Their idea linked climate change with electric cars and was like Airbnb for car chargers, Mr White said.

"We identified that early on as something we thought we could like an idea for,'' he said.

The trio came up with an app. Anyone with an electric car charger or wall plug could register it on the app and people travelling could book in to use it to charge their vehicle.

It was about "filling in those gaps in charger infrastructure and trying to encourage people to adopt EVs quicker'', Mr White said.

Miss Good said electric vehicles kept popping up during one of the group's first meetings.

"We had this conversation where we were like `wouldn't it be so cool if we could email a cafe between here and Oamaru and tell them to put in electric car chargers?'''

After that, there was a "lightbulb moment'' and the group started to develop their idea.

Miss Ding said they bounced ideas off each other and were naturally curious about how it could work.

After entering and winning the University of Otago competition, the trio had been "rewiring'' and "fine-tuning'' their presentation.

They gave a practice presentation to university students and staff last week, which helped them refine their presentation and prepare for the questions they might be asked.

Keeping it under seven minutes was a challenge in itself.

Mr White said studying law helped when it came to presenting, as it gave them a "strong ability to yarn''.

"If time wasn't a factor it would probably be like 25 minutes,'' he said.

The group also planned to travel around the United States and Canada and would get back just in time for their university exams.

Mr White said he and Miss Ding had an exam the day after they arrived back and he had to do an online exam while he was away.

Juggling study, part-time jobs and the WCC had been stressful but worth it.

"This has been like an extra paper,'' Mr White said.

"And we have our final exam in Canada,'' Miss Good added.