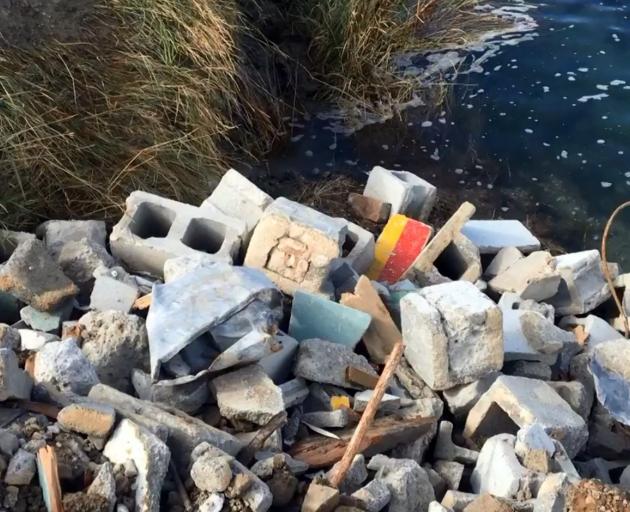 Rubble dumped in the Clutha River in March last year caused a big problem for the Otago Regional Council. PHOTO: RICHARD DAVISON
The Otago Regional Council took great strides towards establishing a fit-for-purpose planning regime last year, but the ORC’s stumbles gained greater attention in 2021. Hamish MacLean looks back at the year that was at the council responsible for managing Otago’s natural resources.

Volatile clashes between leaders and missteps with the public continued to overshadow the accelerating environmental work done at the Otago Regional Council last year.

Under continuing scrutiny from Environment Minister David Parker, the ORC made important progress on its freshwater management planning, it hired scores of new staff to get more work done and it secured new headquarters in Dunedin, ending a search dating back to at least 2007.

Nevertheless, 2021 will be remembered for how the council fought, or faltered instead. 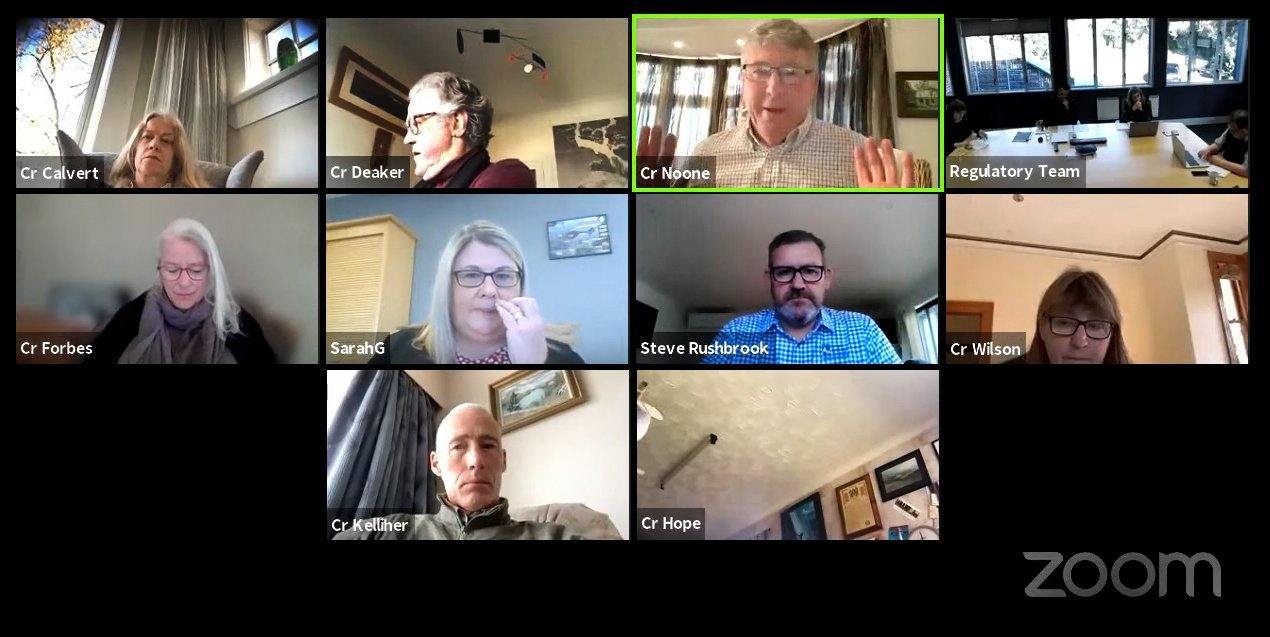 Otago Regional Council chairman Andrew Noone yields the chair at the council's regulatory committee meeting on September 9 after he was questioned about a possible conflict of interest by chief executive Sarah Gardner. The relationship between councillors and ORC management was highlighted last year. PHOTO: YOUTUBE
Ignominious highlights included the resignation of the ORC’s former chairwoman, Marian Hobbs; chief executive Sarah Gardner launching a code of conduct investigation into the actions of deputy chairman Cr Michael Laws; and ratepayers, incensed by a 48.5% rates rise, becoming abusive towards staff.

Outrage over rates rises and rising anger from some corners towards the ORC as regulator spurred conflict de-escalation training for about 90 ORC staff last year.

Mrs Gardner told councillors in October she was concerned for her staff’s safety after eight reports of aggression towards them in the last quarter.

However, when she highlighted her concerns in October, it had not yet been revealed she felt one of the councillors was part of the problem.

Soon after, it was revealed that Mrs Gardner had laid a complaint against Cr Laws in August.

She alleged the councillor’s "discourteous and inflammatory" language presented a health and safety risk to ORC staff.

Cr Laws was cleared of wrongdoing, but the issues the complaint held firmly in the spotlight will continue to cast a shadow over the council this year.

The complaint against Cr Laws stemmed from two reports in the Otago Daily Times in July.

In the first case, an Environmental Protection Authority (EPA) investigation revealed a construction company dumped demolition waste into the Clutha River in Balclutha in March after being told by an ORC staff member it would be all right.

In a July 21 story last year, Cr Laws took exception and told the ODT it was "extraordinarily embarrassing" the council appeared to have advised a company to do something it later took enforcement action over.

Additionally, he was unhappy about the ORC’s lack of transparency about the incident.

And while Cr Laws was cleared of wrongdoing, it is not yet clear the same can be said for the ORC.

Councillors as a group decided last month to launch an inquiry, starting this year, into the ORC’s actions surrounding the incident.

The second issue highlighted by the code of conduct complaint was the ORC’s management of the Manuherikia River.

The code of conduct complaint referred to a July 23 ODT story on public submissions on low-flow scenarios for the Manuherikia. 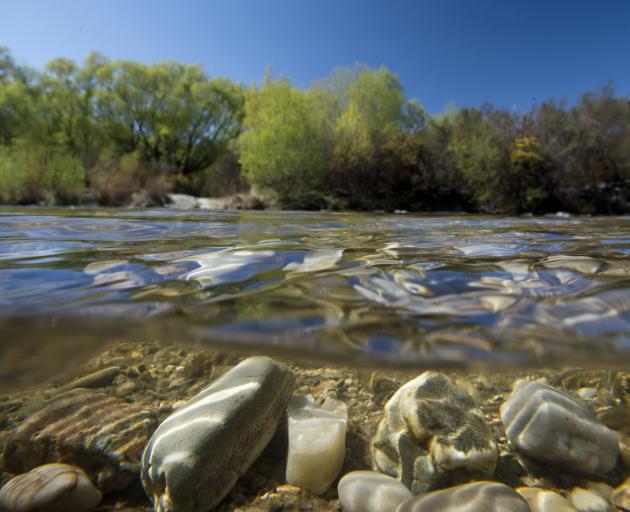 The Manuherikia appears healthy as it flows through Central Otago, near St Bathans, last year. However, the future management of the water is not as clear as the water in the river itself. PHOTO: GERARD O’BRIEN
Cr Laws said he was annoyed staff had publicly released the report, which he described as "crap" and "bogus".

The report was a precursor to an August 25 meeting when councillors chose not to note the staff recommended low-flow scenarios for the river, or any minimum flows, and instead asked the Manuherikia Reference Group’s technical advisory group to continue its work on the issue.

A letter and a resignation

The acrimonious debate among councillors at the meeting was underscored by four councillors levelling accusations of conflicts of interest and predetermination at their colleagues in a letter to Environment Minister David Parker.

The letter, signed by Crs Bryan Scott, Alexa Forbes, Gretchen Robertson and former councillor Ms Hobbs, referred to their colleagues’ "dysfunctional behaviour" and questioned the integrity of their work.

But the ramifications of the decision went further.

It prompted the Central Otago Environmental Society to launch a petition calling on Mr Parker to disband the council and install a commissioner. 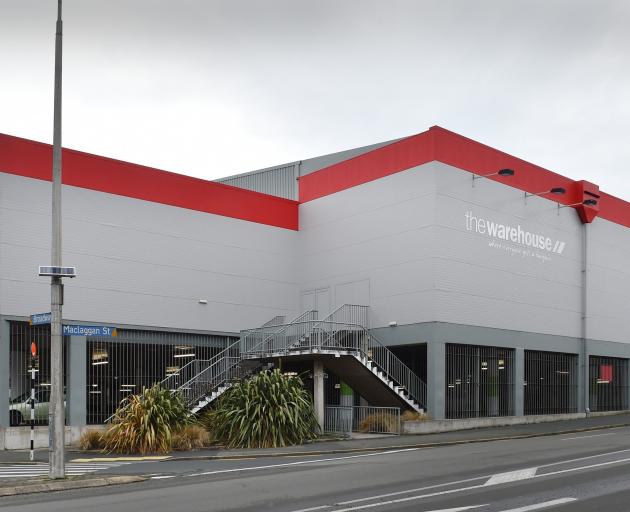 Work will begin this year at the former Warehouse site in Maclaggan St, Central Dunedin, to repurpose it for the Otago Regional Council. Councillors have been told a December 2022 completion date for the refurbishment is an ‘‘aspirational target’’. PHOTO: GREGOR RICHARDSON
The petition attracted about 1500 signatures, among them Ms Hobbs’, who said if Mr Parker did not pull the pin on the council, she would resign.

Mr Parker did not disband the council and Ms Hobbs tendered her resignation as of November.

She will not be replaced and the ORC ended 2021 with one councillor less than it started with.

Meanwhile, when the ORC undertakes analysis of flows for a range of management scenarios for the river, early this year, the technical advisory group will assess each scenario against its newly established criteria for the river’s ecological health.

And yet, much of the ORC’s work last year was praised.

For example, Mrs Gardner noted public transport patronage in Dunedin had bounced back to levels higher than before the pandemic, making it the only network in New Zealand to do so.

In October, ORC chairman Andrew Noone publicly acknowledged the "excellent" work of ORC staff after the Environment Court decided on plan change 7, saying interim consents replacing expiring water permits should be limited to a term of six years.

The council’s proposed regional policy statement was notified for 10 weeks of consultation in June, which met deadlines set out by Mr Parker.

The council said its regional policy statement was the first in New Zealand to be notified since the National Policy Statement for Freshwater Management 2020 was gazetted — with its requirement to adhere to the freshwater concept Te Mana o te Wai.

It was also the first to be developed under new national planning standards and the regional council’s process will be tested in the High Court by Forest & Bird.

Mr Parker has joined the proceedings scheduled for a hearing in February.

The issue is simple. Incompetence across almost all managers to the top dog. Some I.e hazards director should have been removed in last restructure. Hazards and Policy dept management are shambolic and overly conservative. The use of consultants in consents, science and hazards department while double staffing capacity is simply impossible to understand. Amongst all the disarray they employ a new science manager with a track record of failure managing DCC 3waters. Only mass redundancy of management will ever save ORC from itself.

Sack the ORC Councillors, bring in a commissioner and sort the mess out once and for all ... the councillors haven't got a clue what they're doing, apart from when it comes to things that make life easier for them ... like getting rid of one of their own, divvying up that councillors salary, giving themselves a raise and a pat on the back for a job well done.

It's not the ratepayers that are getting any benefit from the ORC the way it is, is "mates", big business and, again, only my opinion, but the perks that can be had, sometimes by dubious means such as "stalling" on consents maybe ... or a bit more Koha that Aroha I'm guessing !!