University Oval poplars to be removed 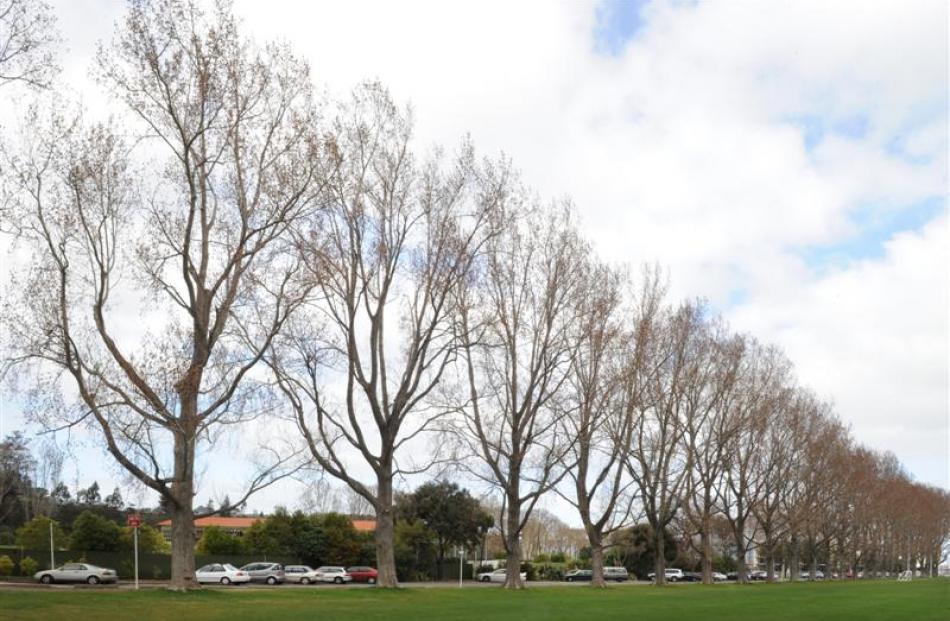 Twelve Ontario poplars in Logan Park Dr (above) between the entrance to the University Oval and the Logan Park tennis courts are to be removed. Photo by Gregor Richardson.

Twelve trees that threatened the future of international cricket fixtures in Dunedin will be removed next week.

The Otago Cricket Association has pushed for the trees on Logan Park Dr to be removed for several years, but the Dunedin City Council, which has been deferring the trees' removal because of the cost, says its decision to bring the work forward is not purely the result of cricket's demands.

The Ontario poplars were originally scheduled for removal as part of the redevelopment of Logan Park.

But when that project was deferred, so was the removal of the trees.

In May 2012, Otago Cricket Association chief executive Ross Dykes asked the council to remove the trees as they cast shadows across the University Oval that forced umpires to cut short some games because of safety issues posed by the mixture of good and bad light on the pitch.

Mr Dykes returned to ask the same thing in 2013, at which point the council tried to find ways they could remove and clear the trees at no cost to it.

That could not be achieved and Mr Dykes again approached the council this year, saying the trees were causing disruption to first-class cricket, had the potential to negatively affect scheduling of international fixtures at University Oval and were a hazard to both the public and vehicles, because of falling branches.

Council parks manager Lisa Wheeler said staff decided to bring them down now to make a start on the sports field development.

''The purpose of taking the trees down was not weighted on cricket's request.''

The felling of the trees also complemented Otago Cricket long-term plans to increase the size of the embankment over that area, but was not related to that plan, she said.

Council staff were in very early talks with the University of Otago about cricket's plans, and would report back to the council after that about whether they supported cricket's plans.

Mr Dykes yesterday said the removal of the trees would be an advantage for the Oval from a ''purely playing perspective'', but he would wait to see what effect their removal would have on the feel of ground, which was, when the trees were in full leaf, ''cosily'' enclosed by the trees.

Ms Wheeler said the trees were moved up on the council's tree removal programme, meaning other tree work would be deferred.