University welcomes the president of Kiribati 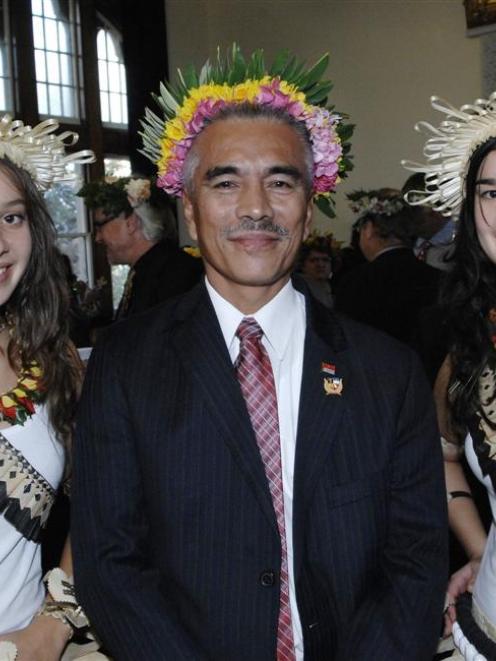 The president of Kiribati, Anote Tong, with Dunedin school pupil Iacinta Lucas (16, left) and her sister, University of Otago student Albany Lucas (21), attends an official welcome in his honour at the university council chambers. Photo by Linda Robertson.
The threatening reality of climate change for some low-lying Pacific Island nations was highlighted during a visit to the University of Otago yesterday by the President of Kiribati, Anote Tong.

Kiribati, a former British colony then known as the Gilbert Islands, is home to more than 90,000 people, most of them living on the densely populated main atoll, Tarawa.

Some scientists have predicted that Kiribati could become uninhabitable within 60 years.

Along with several other low-lying Pacific Island nations, such as Vanuatu, Kiribati is regarded as one of the places most vulnerable to climate change.

In an earlier speech on Environment Day, Mr Tong requested international help to evacuate his country before it disappeared beneath the Pacific Ocean.

Mr Tong, who is a graduate of Canterbury University and the London School of Economics, was welcomed to Otago University with a 3pm ceremony, attended by about 60 people, at the university council chambers.

He was greeted by Prof Sarah Todd, the pro-vice-chancellor, international, and was further welcomed with a kava ceremony staged by Pacific Island students and a dance by Kiribati students and community members.

Among the dancers were Dunedin sisters Iacinta and Albany Lucas, who are of Kiribati ancestry.

Five students with Kiribati ancestry are studying at Otago University.

During a talk, Mr Tong urged people to start taking action on climate change now, and warned that it would have far-ranging effects, including on future generations.