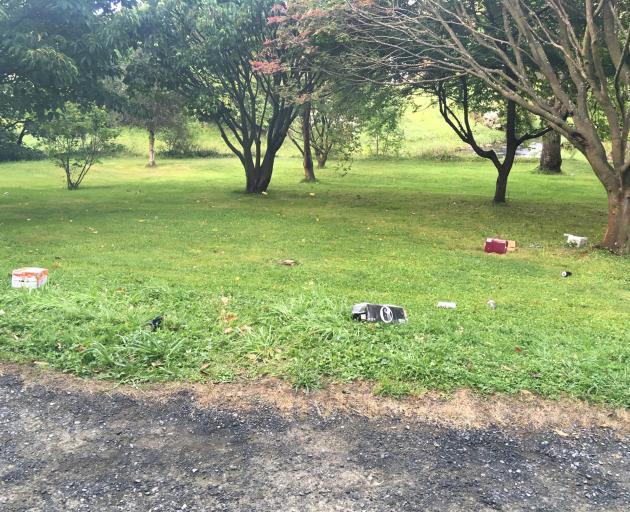 Some of the mess left in the Botanic Garden during Orientation Week. PHOTO: KIMBERLY SMITH
A Dunedin woman appalled by mess in the Dunedin Botanic Garden is calling for the University of Otago to take stronger action against littering students.

Resident Kimberly Smith left a message for University of Otago Vice-chancellor Harlene Hayne on Tuesday morning — a sample of the large pile of alcohol-related waste she had seen left in the gardens.

On Monday morning while walking to work, Mrs Smith came across "an appalling mess".

"I first noticed the mess as I walked past the Croque-O-Dile Cafe near the duck pond.

"There were empty alcohol bottles, cans and boxes strewn about.

"After crossing the bridge and heading along the path I found even more alcohol-related rubbish strewn about.

"I stopped to help a gentleman who began picking up this rubbish.

"He was not a botanic garden employee and was not dressed for such a job."

Mrs Smith said it was time to for the university to start sending a stronger message to students about respecting Dunedin.

"It’s time to start making them take responsibility for their actions and show some respect for the place that welcomes them when they leave home.

Mrs Smith said she had spoken to the University of Otago, the proctor, the Otago Polytechnic, the Otago University Students’ Association and the Dunedin City Council.

"Since the university has so much money, maybe they can invest in having proper patrols that cover the areas surrounding the university to help identify individuals engaging in this kind of behaviour."

University proctor Dave Scott said incidents like this were "disappointing".

"In recent years, the proctor’s office has worked with the Dunedin Botanic Garden to proactively identify days or periods of higher risk.

He said proctor’s office staff, residential college student volunteers and others had attended and assisted in clean-up as required.

"We have and will continue to work with our community partners to address such issues, including using the consequences available within the student code of conduct where needed and appropriate."

Council parks and recreation group manager Robert West said while the botanic garden was not an alcohol-free zone, extra security patrolled the gardens during Orientation Week.

"Garden staff have a good relationship with the University of Otago proctor and the details of any students caught misbehaving are passed on.

"This is a garden of international significance and we would like people to respect it and look after it for everyone to enjoy."

It is well known that since at least two pubs in the area have closed, students frequent the gardens to drink and make merry. Thursday is the worst--or times such as end of semester. This is up to the police to make a few arrests, not the university. And this is not the only park that get littered by lazy people who are not Uni or Poly students--see Memorial park, Mosgiel.

The university is prepared to guard it's skips against the public use. How about then paying or contributing to guard some public spaces against actions of students then.

I have a great idea --- Put some rubbish receptacles around the place...
According to Google -- "Receptacles" a hollow object used to contain something....

If gaining a place at a university is a sign of above average intelligence then as a species we are truly doomed.

It's not only in the garden's that this sort of behaviour is taking place and every year it's always the same old story and cover up.