By Daisy Hudson
0 Comments
He's starred in a television show, released an album, hung out with celebrities, and has now racked up more than one million subscribers on YouTube.

Social media star Kimpoy Feliciano admits people might be surprised to learn he is living in little old Dunedin.

The 27-year-old recently received a gold award from YouTube in recognition of the subscriber milestone. His reaction was documented on the channel.

He started vlogging back in 2011, after he and his family emigrated to New Zealand from the Philippines.

Then, it was a way of connecting with his friends and family back home and keeping them up-to-date with life in his adopted country.

He has also starred in Filipino television shows and released his own album.

He believed his longevity and success was due to jumping on the social media bandwagon before it really took off.

"I was one of the first from the Philippines to do Twitter and YouTube and I got surprised, because most of my stories are just normal stories of someone who lives overseas.

"I didn’t really aim to get one million subscribers. It just happened." 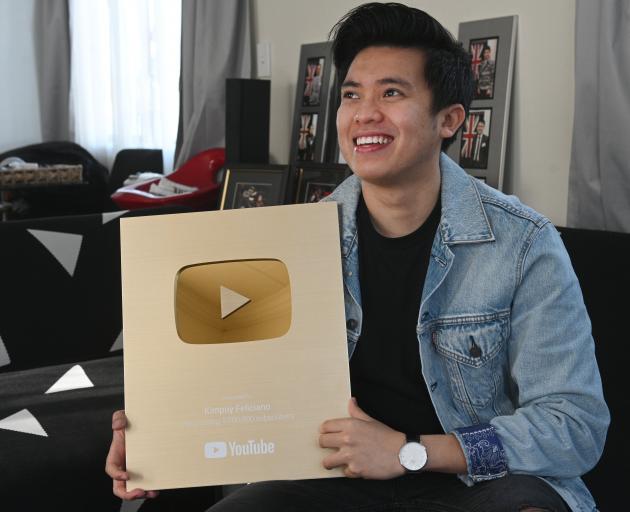 Sharing so much of his life online had pros and cons.

He was able to pay for his university studies, he had met celebrities such as pop star Dua Lipa, and he was offered partnerships with big name technology brands.

On the flip side, however, were the loss of privacy and the pressure to come up with new content.

"Keyboard warriors" could also be an issue.

One of his passions was travel, and tourism bodies around the world sponsored trips for him to post about.

Covid-19 had put paid to that side of his vlogging for the near future, so he was focusing his content more on his family and domestic travel.

"To be a successful vlogger you have to adjust to what works for you, that you kind of don’t push what you can’t do."