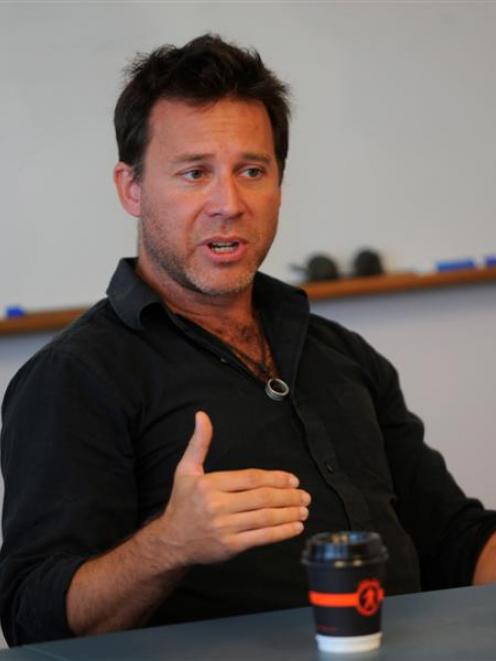 Former Reuters correspondent Chris Allbritton speaks at a University of Otago seminar on journalism and the war on terror. Photo by Gregor Richardson.
A former Reuters Middle East conflict zone correspondent has taken a shot at the media's term ''war on terror'', saying it is nothing more than ''hideously overused'' marketing.

During a seminar at the University of Otago yesterday, Chris Allbritton said the term was a wonderful marketing slogan, perhaps even a great bumper sticker, but was definitely a terrible phrase coined by the George Bush administration.

''The Bush administration was very good at marketing.

''I think it's simplistic - it leads to no real concept of victory or when it [the war on terror] will end.

''I think it's deliberately sloppy thinking, to justify whatever the Bush administration wanted to do.''

Mr Allbritton has spent much of the past decade living and working in the Middle East, as former bureau chief for Thomson Reuters in Pakistan and a freelance reporter for Time magazine and other publications. He is noted as being the pioneer of reader-funded reporting through his back-to-iraq.com website, which he established in 2002.

For six years, he was paid by readers to cover the conflict in Iraq.

He has received the John S. Knight Fellowship for media research at Stanford University and written for the Associated Press in New York.

Mr Allbritton's most recent work in Pakistan ended when he discovered his name was on ''a Taliban list'. He was evacuated from the country soon after.

He told about 40 people at the University of Otago seminar that life in conflict zones was dangerous at times, with several of his journalist friends being kidnapped. He had been shot at while working.

However, his experiences had led him to believe ''war on terror'' was a misnomer.

''I think the danger of being killed in a terrorist attack is quite small.

Since leaving Pakistan, Mr Allbritton had become ''nomadic'' and spent much of his time running his blog site www.trulynomadlydeeply.com, documenting ''global slow travel in a jet-speed age''.