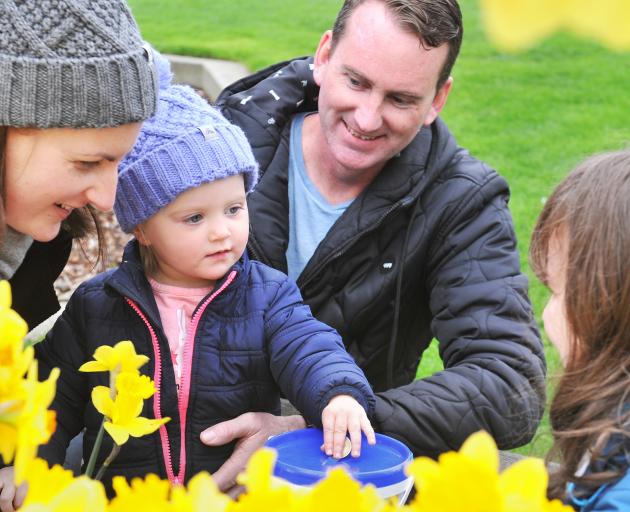 One-year-old Ayla of Dunedin makes her Daffodil Day donation, watched by parents Melissa and Richard Needham and Cancer Society collector Alex Clarke, in the Octagon yesterday. Photo: Christine O'Connor
Chilly weather on Daffodil Day yesterday was no bar to people having their heads shaved to raise money for the Cancer Society.

Five ANZ bank employees in Dunedin, Matt Gregory, Matt Casey, Matt Elliot, Matt Moore and Cam Warn, teamed up to have their hair shaved and, in one case, to lose a luxuriant beard.

Matt Gregory formed a team with the other Matts, then found Cam Warn was also keen to be involved. Cancer was something which had touched all of their families and their bank was the principal sponsor of Daffodil Day, Mr Gregory said.

Their hair removal event, watched by about 40 people outside the Moray Pl branch of ANZ raised almost $5000. They hoped to add to the total by the end of the day.

And a head-shaving exercise by 10 pupils and a senior teacher at King’s High School also contributed several thousand dollars to the cause.

Volunteers braved the cold wind, standing on street corners to sell bunches of daffodils and collect donations from people passing by.

The Cancer Society’s Otago and Southland regional marketing and communications manager Chris Green said he had been "blown away" by the response of the public yesterday — and during the whole month leading up to Daffodil Day.

More than 70 schools in the South had been involved in raising money and there had been "huge" support from about 1500 volunteers all around Otago and Southland.