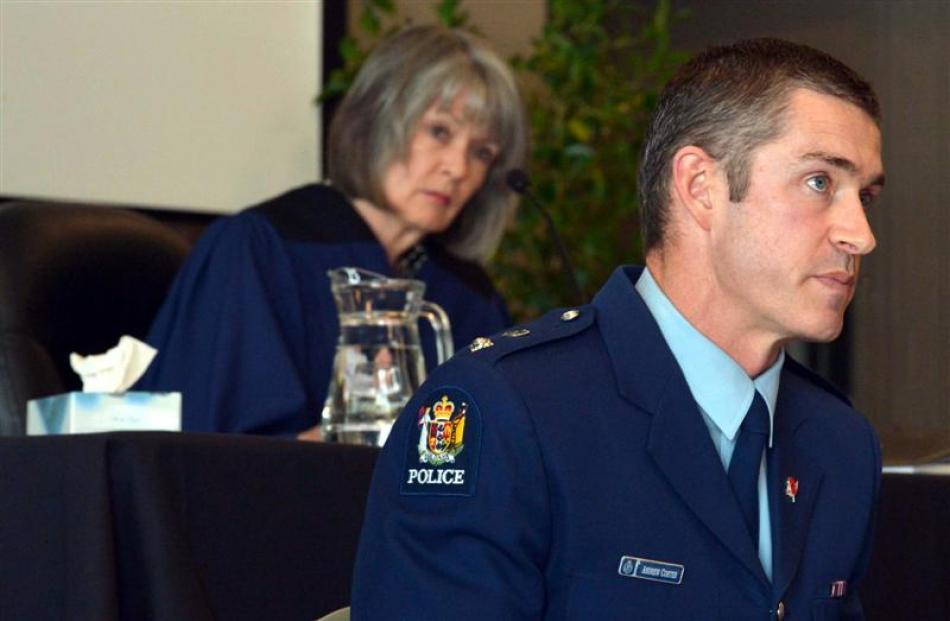 Southern district commander Superintendent Andrew Coster gives testimony yesterday during the last day of the inquest into the deaths of Edward, Bradley and Ellen Livingstone as Chief Coroner Judge Deborah Marshall watches on. Both struggled to hold...

Otago's top policeman choked back tears as he recounted Dunedin police's significant failures in their handling of Edward Livingstone.

''We fell short,'' Southern district commander Superintendent Andrew Coster conceded yesterday during questioning on the final day of the inquest into the deaths of Livingstone and his children.

Livingstone shot and killed Bradley (9) and Ellen (6) Livingstone with a 12-gauge Stoeger shotgun in their beds on January 15, 2014, in the St Leonards home the children shared with their mother, Katharine Webb.

Chief Coroner Judge Deborah Marshall heard yesterday Dunedin police made a number of ''significant failures'' in their duty of care to the children and their mother.

Supt Coster said he would not ''speculate'' on whether police could have prevented the deaths if the mistakes had not been made.

''You are asking me to speculate what would have occurred if A, B, C, D had happened - I simply can't do that,'' he said.

Dunedin police failed to record and investigate some bullet cartridges that were given to the children by Livingstone, ostensibly as a present.

''Anything could have affected the final outcome,'' Supt Coster conceded when asked by Anne Stevens, counsel for Ms Webb, if the police's failure to follow up those matters might have contributed to the deaths.

Despite their failures police were ''well intentioned'' in their handling of the Livingstone matter.

''Police are 100% committed to protecting victims and this is a really tragic case, but we can't change what happened,'' Supt Coster said, choking back tears.

Livingstone told several people about thoughts he had had of killing his children.

However, those scenarios did not involve shooting the children, Supt Coster said.

''The ideation he suggested was using an axe,'' he said.

''He had a sick ideation and [it] suggested a level of commitment to carry out these acts.''

In the months before the deaths, Livingstone was twice charged with breaching a protection order preventing him from contacting Ms Webb.

He was mistakenly granted diversion for the first instance and received a discharge without conviction for the second.

Dunedin police first became aware of an overseas conviction in August 2013, but the matter was not followed up and police did not find out the extent of his offending until December 9, 2013 - the month after he was discharged without conviction.

Ms Webb sought a protection order which was first issued on May 31, 2013, and finalised on August 13.