What birds are in your garden? 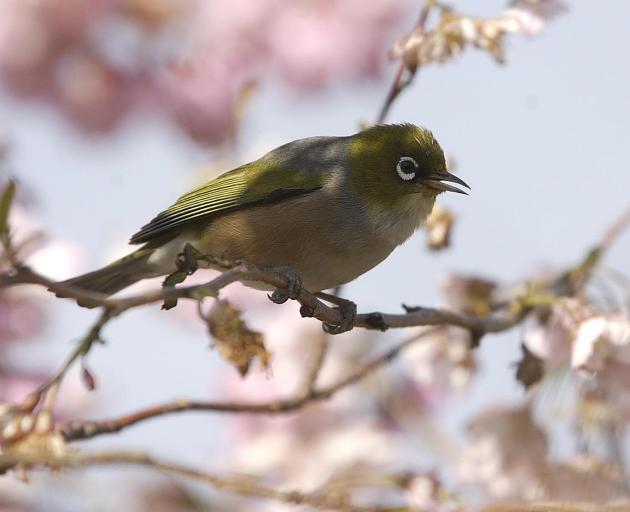 The silvereye (also known as a waxeye). Photo: Peter McIntosh
People in Otago and Southland are being encouraged to take part in the latest annual nationwide Garden Bird Survey, which starts on Saturday and ends on July 5.

Readers are asked to watch and note birds in their gardens during one hour on one day in the survey period.

Dunedin and Otago people have traditionally topped the pecking order as the country’s most enthusiastic participants in this Landcare Research-led survey, now in its 14th year.

"Otago people continue to contribute more survey forms than other parts of the country on a per capita population basis," survey organiser Eric Spurr said.

Otago people last year provided 15% (531) of the returns, despite the region containing only 5% of the country’s gardens.

"It shows the keenness of people in Otago for the birds," Dr Spurr said.

Southlanders also showed a solid interest: their 65 responses comprised 2% of returns, from 2% of the country’s gardens.

Otago-Southland people provided 132 returns through a form in the Otago Daily Times.

The high rate of response meant Dunedin could be regarded "as the ‘birding’ capital of New Zealand", he said.

House sparrows were the most commonly-sighted bird in Otago last year (average 11.2 sightings, up from 9.9 in 2018).

Otago-Southland recorded some of the country’s highest increases in sightings of kereru (wood pigeon), tui, and fantail over the past 10 years.

Silvereye counts fell nationally by 38% over that period, and by 52% in Otago-Southland, he said.

Some people found it hard to tell the dunnock and the female house sparrow apart, but the dunnock was darker, more solitary and had a finer bill.

Completing the survey would help the environment by enabling more to be learned about birdlife, Dr Spurr said.

The survey’s supporters include Forest and Bird, Birds New Zealand, iNaturalist and Topflite.