What's in the pipeline for historic Dunedin loo? 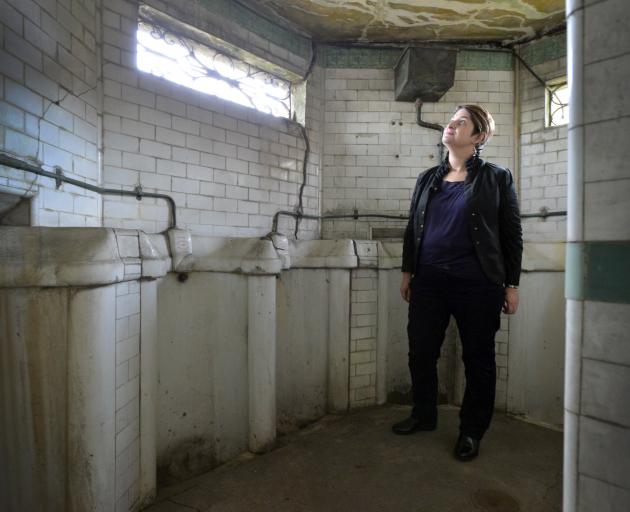 Dunedin City Council digital archivist and ‘‘Loo Lady’’ Alison Breese explores the Manor Pl toilets — believed to be New Zealand’s oldest public toilets. PHOTO: GERARD O’BRIEN
For most people, there would be a certain amount of anxiety about what will be found behind a door that has been bricked shut for several decades - especially when the doorway leads to the oldest public toilet in New Zealand.

But Dunedin City Council digital archivist and "Loo Lady" Alison Breese was flushed with excitement this week when council contractors cut their way back in to the Manor Pl public toilets.

She said the facility was built in 1912 and was believed to be the oldest standing public toilet in New Zealand.

The building was rare because most public toilets were remodelled in the 1960s.

Because the Manor Pl facility had been closed to the public since the 1970s, it was preserved and still had its original tiles and urinals.

Mrs Breese said it was reopened this week so council parks and recreation staff could carry out a conservation report on the structure to determine its future. 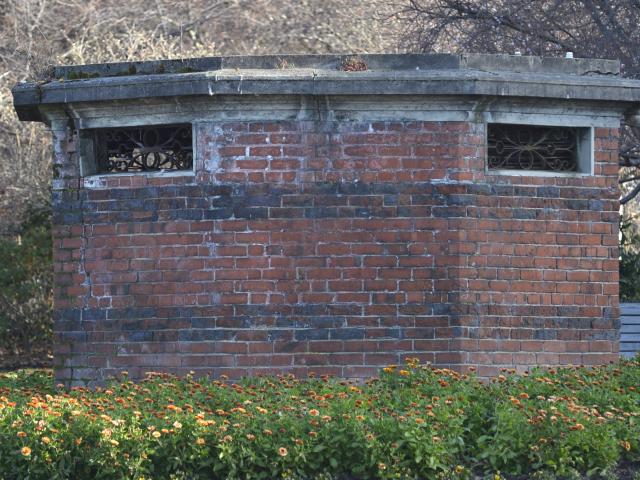 The toilets from the outside. PHOTO: GERARD O'BRIEN
She said several options were being investigated, which included repairing it for use again because there were no public toilets in that area of the city, restoring it because it is believed to be New Zealand's oldest public toilet, or demolition.

"It may be too far gone. It's got massive cracks in it and what it's sitting on is not stable."

The facility was of particular interest to Mrs Breese because she is in the middle of her master's degree at the University of Otago, studying the demise of subterranean structures over the 20th century and the changing social attitudes towards them.

She is working on her thesis which is believed to be the first in New Zealand to be presented on a born-digital platform.

"It will have film footage, then-and-now picture sliders, and a 3-D virtual reality tour of some of Dunedin's former public toilets."

She said most of the former public toilets no longer existed, and the virtual reality tour was a great way to show what they looked like.

"You can look at old plans, but you don't really get it.

"This way, you can see how narrow the stairs were, how cramped it was and how there was hardly any provision for women.

"It makes it more real for people."

She hoped to submit the thesis next year.

"The building was rare because most public toilets were remodelled in the 1960s"
"She said several options were being investigated, which included repairing it for use again because there were no public toilets in that area of the city, restoring it because it is believed to be New Zealand's oldest public toilet, or demolition.
"It may be too far gone. It's got massive cracks in it and what it's sitting on is not stable."
So because it is so rare you want it pulled down?, if something is that rare then you don't pull it down, whatever the H are you thinking???.

Demolition of historic buildings & other structures is destroying our heritage. Dunedin is built on history & we need to retain as much of our history as possible. Even if the toilet building is not reopened, at least keep the building the way it is, supply for what it is.

Clochemerle style pissoir. Penny forum. The Edwardian term 'Rumpty' referred to poor who had no toilets of their own.

- Who's toilets did they have?

Where's Cr David Benson-Pope to argue that this heritage building must have money spent on it and be preserved by its owners? He was demanding the same from private owners not all that long ago.