Why Dunedin is investing in cycling 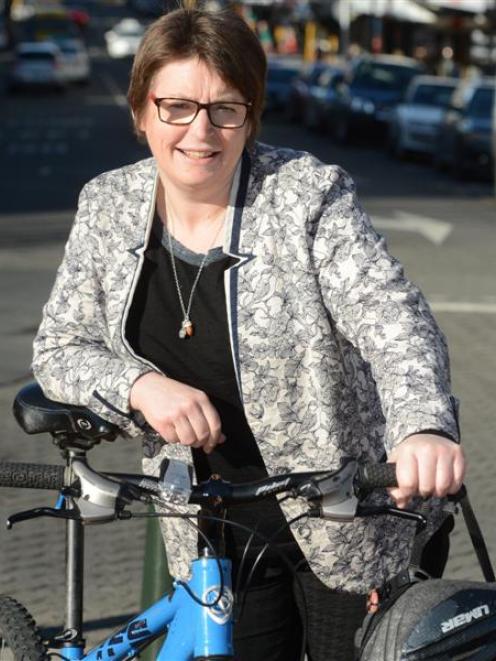 Cr Kate Wilson says cycleways will bring myriad benefits to Dunedin. Photo by Linda Robertson.
Dunedin appears divided over the cycle network. Some see it as unnecessary. Others see it as vital. ODT reporter Craig Borley spoke to Dunedin city councillor Kate Wilson, chairwoman of the infrastructure services committee, about why the city is investing in cycle infrastructure.

ODT: Should the council be investing in cycleways when the city still needs basic infrastructure upgrades?

Cr Wilson: All aspects of a city are about liveability, and as important as it is to do drains and infrastructure to meet demands, to make the city liveable and safe and efficient it's equally important to make sure the city is easily connected. We're a city of 120,000 people, many of whom don't have access to cars or don't want to have access to cars. And we need to provide for them, too.

ODT: There are currently comparatively few cyclists using the network. Is it worth investing so much for so few?

Cr Wilson: These cycleways aren't aimed at the people you see cycling now. They're aimed at the people who want to get on a bike but currently see Dunedin roads as intimidating. And we think that's about 65% of Dunedin's population, based on national and international data.

One hundred and fifty years ago, cities started building undergrounds. Then it was roads, then it was motorways.

Infrastructure needs change over time, and they're never cheap. But ignoring them just isn't an option.

ODT: Why haven't any of those responsible for mistakes on the South Dunedin Cycle Network been sacked?

Cr Wilson: Retrofitting anything to a well-used network is fraught and difficult. Doing it to a roading system is equally so. This is relatively new throughout the world, and it has been a steep learning curve. I'm sure that having made some mistakes it's better to keep the staff who have learnt the lessons.

ODT: What is the true value of cycle infrastructure to a city?

Cr Wilson: They're priceless. You cannot put a value on a city that works really well for every age group.

Not only does it mean that children will have very happy memories of being connected with their friends and family, but for the people we need to be the economic drivers for this city, we need to be attractive to that age group as well. And cycleways are essential to that market.

ODT: Could Dunedin have chosen not to invest in cycleways?

Cr Wilson: No. It would be really backwards to do that. This is happening. Across the world cities are prioritising cycling. Sticking our head in the sand won't change that.

If we want to be a modern liveable city people want to live in, we need to do this. There's no choice here.

ODT: How has cycleway investment benefited other cities around the world?

Cr Wilson: If you look at examples in North America, in Europe, it is the way to get around now. It allows people to be much more connected than you are in a car. When you get on a bike, people say hello to you.

ODT: Are there health benefits attached to this?

Cr Wilson: It's just so obvious. In our society the health problems of obesity and mobility are huge. Not everyone can run. But most people can bike.

ODT: Are these cycleways being driven by a ''greenie'', anti-carbon, political agenda?

Cr Wilson: Absolutely not. As the age limit for getting your car licence has gone up, there are more and more people who can't connect with their friends.

Most people who have a problem with cycling are scared of having an accident with them, and separated cycleways are the best way to ensure that doesn't happen.

ODT: Will this cycleway investment bring any employment or recruitment benefits for Dunedin?

Cr Wilson: I've heard a number of times, from university and from businesses, that access to good cycle networks is actually key to attracting the sort of workers that are going to drive our economic development strategy.

ODT: Will there be tourism benefits from this network?

Cr Wilson: As chair of the Otago Central Rail Trail Trust, I've seen how it works. If you can connect wonderful tourism infrastructure to great experiences, tourists will not only stay longer but also spend more.

Cycling is a slow pace of tourism, you get to interact at a level which enhances the experience. And it's that experience that is key.

As a whole, this network will benefit tourism. At the moment people are seeing the South Dunedin Cycle Network as an everyday commuter activity.

But we see very strong desire lines to St Clair in weekdays and weekends. They are quite different markets and the SDCN addresses both of those.