Port Otago will embark on a major six-month project to remove 45,000cu m of excess dirt and rock from Flagstaff Hill, Port Chalmers, from Monday.

Port Otago chief executive Kevin Winders said the $2.5 million project would stabilise the hill, create a series of terraces on its east and northeast faces and return Beach St to its original position.

Flagstaff Hill, which is mostly owned by Port Otago, had a long history of slipping, and had suffered significant slumping during a major weather event in 1999, Mr Winders said.

This had resulted in the need for a protective container wall along the bottom of the hill, the narrowing of Beach St and the loss of the footpath.

‘‘It will be good to tidy all that up and reinstate the footpath for the public,’’ Mr Winders said. 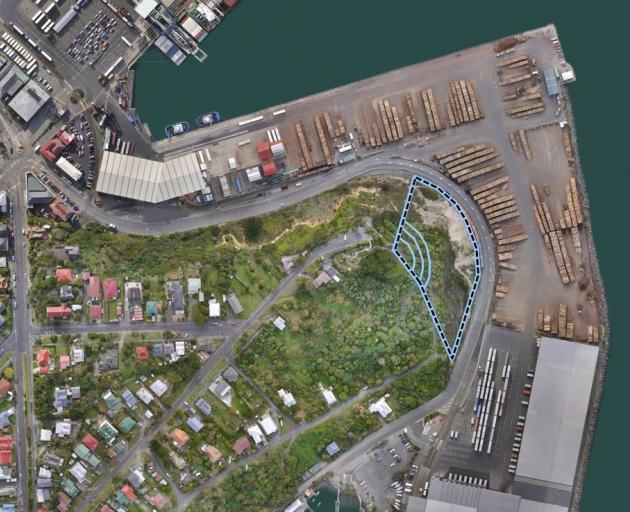 The end of Flagstaff Hill, which slumped during a major weather event in 1999, will be stepped and Beach St realigned by Port Otago in a six-month project set to start on Monday. Image: Supplied

The work would also allow Port Otago to move its fence­line to bring the railway line within the port environs — which would improve safety, he said.

During the six-month project, there will be some impact on local residents, including a detour at Beach St, some isolated blasting and an increase in truck movements as the 45,000cu m of rubble is moved to landfill.

Mr Winders said transporting the rock and dirt to landfill would require about 2500 truck movements across the six months — equating to five per hour.

These would operate from 7am to 6pm, Monday to Saturday.

Contractor Fulton Hogan would work hard to minimise noise, vibration and mud from the work site, and truck drivers would adhere to the voluntary 30kmh speed restriction on George St, Port Chalmers.

Mr Winders said Port Otago had investigated a range of options for disposal of the excavated material, including using it on the West Harbour cycleway-walkway and Port Chalmers Golf Course, but uncertainty around resource consent had made it too difficult.

‘‘We have a limited window for getting the work done — it is critical for us to have it completed by the start of the next cruise ship season.’’

Port Otago was expecting 131 cruise ships in the 2019-020 season, with high levels of associated bus and rail movements.

‘‘The sooner we can get through the work the better, so we are really hoping for good weather,’’ Mr Winders said.