By Molly Houseman
0 Comments
Birds at Orokonui Ecosanctuary have been happy to have at least one visitor during lockdown. 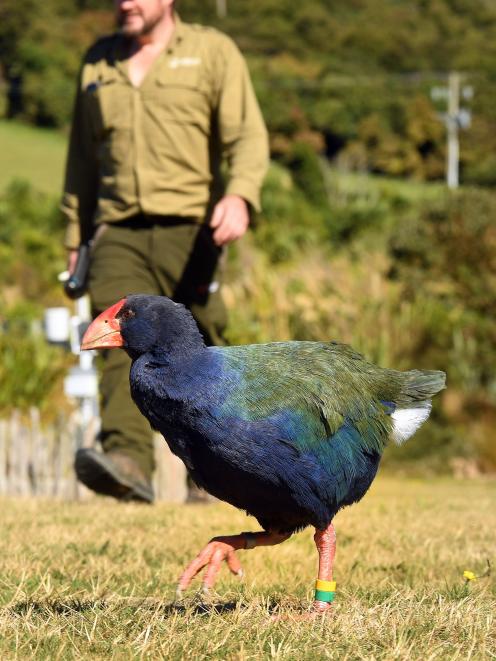 Orokonui Ecosanctuary has closed during lockdown but conservation manager Elton Smith continues to carry out essential jobs, including feeding the takahe who race him to the food station.
While the ecosanctuary has had to close to visitors, the essential work done there, including animal husbandry and biosecurity, has continued.

Conservation manager Elton Smith had been working every day to ensure tasks, including checking supplementary feeding stations and health checks on kiwis, were carried out.

Contrary to what the name suggested, he said, some birds were "completely reliant" on the supplementary stations in order to survive.

Among the birds happy to see Mr Smith were a takahe, which enjoyed racing him to the feeding station and a rehabilitated kakapo named Xena, which he often included in video updates on the ecosanctuary’s Facebook page.

A fence which kept out introduced mammals such as rats and stoats also required frequent checks.

While the work had been challenging at times, Mr Smith said he felt lucky to be able to continue to work.

"It is better than sitting at home all day."

However, the ecosanctuary shared the same concerns as most businesses in unprecedented times.

General manager Amanda Symons said having no visitors to the cafe and on guided tours would mean a loss of profit, and there was uncertainty around when the ecosanctuary could reopen.

"It has been surreal for both the birds and us," she said.

The birds at Pilots Beach on Otago Peninsula had also been well looked after.Blue Penguins Pukekura scientist Hiltrun Ratz had continued to feed penguins every day, including chicks who had been abandoned by their parents, as they had gone into moult.

Blue Penguins Pukekura scientist Dr Hiltrun Ratz holds a little penguin chick at Pilots Beach after feeding it salmon smolt. PHOTOS: STEPHEN JAQUIERY
She said there had also been a few chicks who fledged and then returned.
Dr Ratz said the Otago Peninsula Trust and Pukekura Trust had no income because of Covid-19, and would rely on Government help to fund conservation efforts.

She hoped New Zealanders would also show their support and visit for tours, when restrictions allowed it.