Years of beautification wiped out by KiwiRail 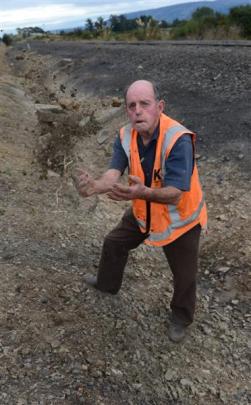 Beautification project manager Lester Harvey looks at what is left of the plants and shrubs on the South Gladstone Rd railway corridor in Mosgiel. Photo by Peter McIntosh.

Several years spent planning and planting hundreds of shrubs to beautify the Gladstone Rd railway corridor in Mosgiel have been stripped away in a matter of hours by a KiwiRail ditch digger.

Until last week, the 4km corridor between Wingatui and Riccarton Rd was lush with plants, shrubs, including many natives, and rhododendrons.

But a digger has been along the railway line between Gordon Rd and Riccarton Rd and cleared the corridor of grass and the majority of the plantings.

The destruction has horrified local residents and left many up in arms about it, including beautification project co-ordinator Lester Harvey.

''They needed to remove some trees that were obstructing the line of sight from the crossing into KB Contractors yard opposite Cemetery Rd.

''The rail requires 400m either side of a crossing, with clear view of the railway line, if it is an uncontrolled crossing. This one just has a stop sign.

''There were about nine, or possibly 10 trees, that needed to be removed within that 400m.''

''When you looked down the road at that crossing, they definitely did obstruct the view, and I for one didn't want to see anyone turned into mincemeat on the crossing.''

However, what was agreed was not what happened, he said.

The contractors removed some of the agreed trees - and more than 50 other plants and shrubs not agreed, outside the 400m zone.

Mr Harvey said the plants were dumped on the opposite side of the railway line and KiwiRail had told him he was welcome to take them away.

However, the plants had been scraped off at ground level and had damaged root systems, so were unlikely to grow, he said.

He believed the remaining plants were also likely to die, particularly the rhododendrons, because they had shallow root systems and the earth had been scraped away from around them.

''It's a bit heartbreaking, all right.''

Mr Harvey said he had considered asking KiwiRail for compensation for the damage, but believed it would be a fruitless exercise.

''They own the land.

''The message we want to get across to KiwiRail is that they must consult us more.''

Mosgiel resident and one of the instigators of the project Brian Miller said he was left speechless by the destruction.

''Just imagine how I felt this morning when I travelled along the section from Riccarton Rd towards the industrial area, and saw the destruction of the thousands of hours of voluntary labour and gifted plants that had been ripped out.

''Total destruction of this section of the project.''

He said the beautification project was a Mosgiel Taieri Community Board initiative, brought to fruition in 1997 with support from the Dunedin City Council Keep Dunedin Beautiful committee, Tranz Rail (now KiwiRail) and volunteers.

KiwiRail southern regional manager Neil Campbell said the company was working through the Mosgiel area to keep the tracks in good condition and ensure operational safety.

To achieve this, vegetation was removed because it was blocking level crossing sight lines, which meant people could not clearly see if the train was coming, he said.

In other areas, vegetation blocked drainage which led to track formation damage and needed to be cleared away.

Improvement works included replacing sleepers and rail grinding, and in mid-April a ballast cleaner would run along the track.

It would improve the track quality, resulting in smoother and quieter track, he said.

''We can understand why local residents would have been upset if they were not aware of the works taking place, but can assure them that before doing the work, KiwiRail liaised with Taskforce Green and the Dunedin City Council.

''This included a site visit to better understand the scope of the work, which a community representative [Mr Harvey] attended, and to decide what might be able to be retained - for example the rhododendrons.

''We had understood that the wider community would then be informed of our proposed works following the meeting.''

Mr Campbell said a beautification lease was in place between the Mosgiel railway station and Cemetery Rd, and KiwiRail intended to work with the DCC and Taskforce Green on replanting options for the area, bearing in mind that it was a narrow area, once work is finished.

''We will discuss the possibility of extending the lease area towards Riccarton Rd.''