Yelled to children ‘get out’

By Molly Houseman and Emma Perry
0 Comments
A Dunedin woman screamed for her young children to get out of the house moments before it caught fire and its windows exploded.

The children ran from the Portobello rental home and then the family watched as everything they owned was destroyed.

Alice Hudson said she had seen puffs of smoke, then trees on the property catching fire in the windy conditions on Saturday afternoon.

A loud bang came shortly after the fire started, which was her car exploding. 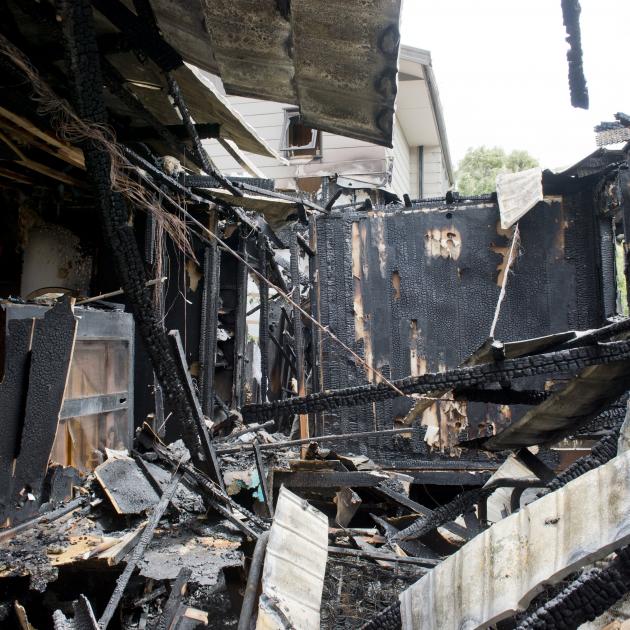 hat was left of a Portobello home after a fire engulfed it at the weekend. PHOTO: GERARD O’BRIEN
By that time, she had called her partner and 111 and the family could not believe what they were seeing.

The family has also not been able to find their two grey cats since.

Emergency services were called to the fire in Beaconsfield Rd about 4.30pm.

Black smoke billowed from the house. Twenty-eight residents from 14 surrounding homes were also evacuated, as strong winds caused the fire to spread.

Ms Hudson was inside her house when she noticed puffs of smoke coming into her front garden.

She believed it was from where people at a neighbouring property had made a barbecue fire pit the night before.

Knowing there was a strong wind warning, she told her two children, aged 7 and 9, to stay inside and went to have a look.

Her eldest daughter, aged 12, was at a friend’s place and her partner was also out.

"I ran out ... I could see the fire pit — all of the embers — I just watched as it hit the macrocarpa hedge and tree line," she said.

Each gust of wind took the flames higher.

Within a minute, the sheds that were near the tree line were engulfed in flames and everything started exploding, she said. 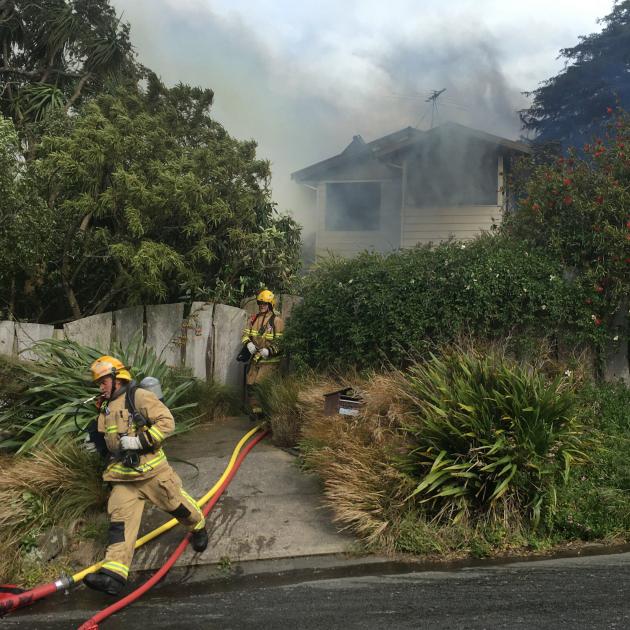 Firefighters work to put out a house fire in Beaconsfield Rd, in Portobello, on Saturday. PHOTO: GERARD O’BRIEN
Ms Hudson screamed for her children to come out of the house and they ran on to the street.

"It was utterly devastating."

Neighbours came out to help and gave her children shoes and jackets, as they were only wearing T-shirts and shorts.

"I was pretty hysterical.

"I don’t think we have slept," she said yesterday.

Fire and Emergency New Zealand fire risk management officer Marty Jillings, who was at the scene yesterday, said one of the potential ignition sources that was being investigated was ember transfer from a fire pit.

‘‘Once the fire began to develop within the macrocarpa trees, surrounding sheds and house, strong winds transferred embers around the neighbourhood, five additional fires were identified with the furthest located over an estimate 200 meters away.’’

Neighbours assisted firefighters in extinguishing the small fires, he said.

‘‘It is important that if you are looking to burn anything within your property outside of a restricted fire season to check weather conditions, especially strong winds.’’

He said a closed door had prevented the fire from entering one bedroom.

Neighbour Jo Taylor praised the Portobello Volunteer Fire Brigade which worked hard to stop the fire from spreading while waiting for more crews to arrive.

Police also went from house to house to ensure everyone had been evacuated, she said.

Evacuees were taken to Portobello’s Coronation Hall, where Otago Peninsula Community Board chairman Paul Pope arranged dinner for them.

Smoke and flames from the house fire in Beaconsfield Rd, in Portobello, on Saturday were seen from Port Chalmers. PHOTO: BRUCE CALDER
An Otago Civil Defence and Emergency Management spokeswoman said one person stayed elsewhere overnight due to smoke in their house.

The fire was also devastating for the owner of the Beaconsfield Rd property, Heather Morris.

She and husband, Warren, had purchased the home in 1989 to live in, but had been renting it out in recent years.

"They’ve [the tenants] lost everything, absolutely everything," Ms Morris said.

The Otago Peninsula Community Board is asking for donations for the family to be dropped off to the Portobello School office any time from today.

Vouchers for The Warehouse or Farmers would help the family to buy toiletries, underwear and personal items, chairman Paul Pope said.

A Givealittle page was also set up for the family. It had reached more than $10,000 last night.