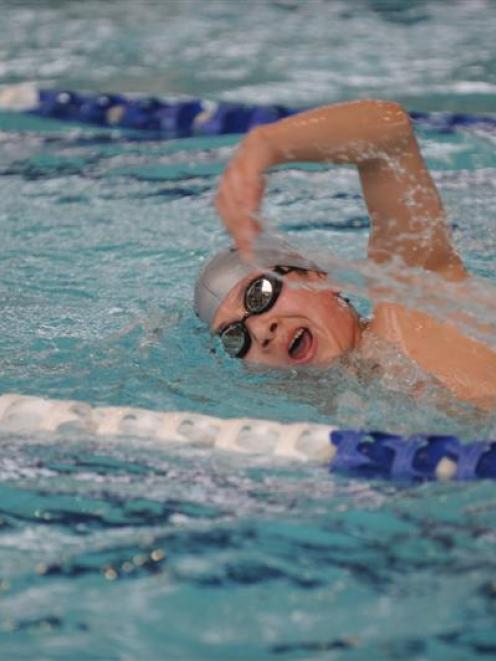 Up-and-coming Otago swimmer Han Zhang trains at Moana Pool in Dunedin yesterday. Photo by Peter McIntosh.
Never give up. Han Zhang has adopted this motto and his perseverance paid dividends at the national short course swimming championships in Wellington.

Zhang (13) won seven medals - four gold, a silver and two bronze - and was the most successful Otago swimmer at the championships.

He has been swimming competitively for five years and joined Gennadiy Labara's Osca squad three years ago.

His best performance at a New Zealand championships before this month's event was fifth in the 200m butterfly at the national age group championships earlier this year and his specialty events are the butterfly and breaststroke.

The four gold medals he won at the championships were also Otago age group records with the most significant being the 100m breaststroke and 200m butterfly that were both long-standing records set by Sam Carradus in 1997.

Carradus, a former pupil of John McGlashan College and a member of Zhang's Neptune club, was one of the most promising junior swimmers in the country at that time.

Fourteen years is a long time for an age group swimming record to last and it was a good indication of Zhang's potential.

Zhang made significant improvements in his personal best times at the championships.

Zhang has eight training sessions each week with the Osca squad.

"Swimming is fun," he said.

His immediate goal is to qualify for the New Zealand open championships next season and longer term to compete at the Olympic Games.

In his spare time, Zhang likes to hang out with friends. But he is not a typical teenager. As a competitive swimmer he has to be careful what he eats.

While Zhang was born in New Zealand both his parents were born in the Anhui Province of China, and he goes back to visit his grandparents in China each year.