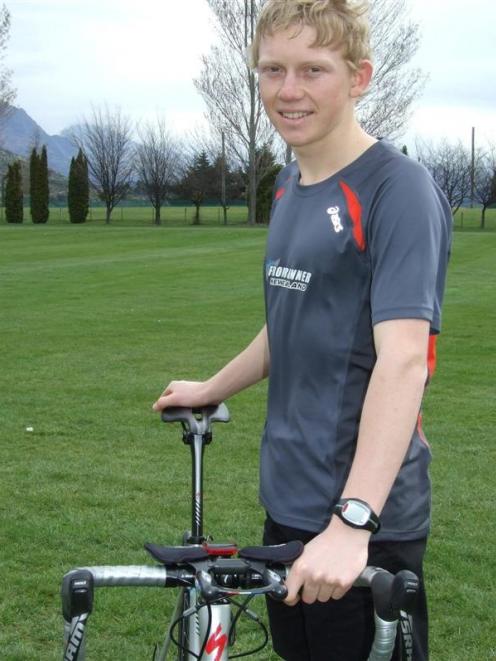 Wakatipu High School pupil Fynn Thompson's goal is to compete in triathlon at the 2020 Olympic Games. Photo by Christina McDonald.
A cross-country race in which he sprinted at the beginning and consequently slid down the pack to finish at the bottom prompted Fynn Thompson to learn how to train properly.

Having become serious about triathlon at the start of 2011, Thompson's goal is now the 2020 Olympic Games.

Before that, he is preparing for the under-19 world championships, which are being held in Edmonton, Canada, at the end of August next year.

Thompson (17) needs to qualify for the championships so he said his main goal for the New Zealand summer is to take part in the selection races to be eligible.

Thompson, who is in his last year at Wakatipu High School, said he had been hooked on sport since learning good results could be earned by good training.

A typical week for Thompson involves 20 hours of training, broken down into seven swims, four rides and four runs.

Triathlon had appealed because it gave him ''three things to focus on''.

With his last year of school to complete first, he concedes it is tough to fit everything into a week.

''It is quite tough, but I have to try and really focus at school.''

Next year, he has decided to work for a year, focus on sport ''and see where that takes me'' rather than pursuing full-time study.

Heading to university or polytechnic was a big commitment, especially when he was not sure which subjects to pursue.

He would also be entering races and competing on the national circuit.

Thompson considers himself lucky to be able to train and compete in the Queenstown Lakes district.

''We are so lucky to live here - there are so many people interested in the sport.''

He credits people like coach Val Burke and race organiser Adrian Bailey with pushing the multisport scene in Queenstown.

Fynn Thompson
At a glance