People at St Kilda beach make the most of a warm spring day in September last year. PHOTO: PETER MCINTOSH
A veteran climate scientist has called 2018 our hottest year on record.

Niwa is not due to release its official summary for the year until early next week, but honorary research fellow at the University of Otago professor Jim Salinger has already picked it as the warmest yet, from records stretching back to 1867.

His figure also surpassed the scorching years of 1998 and 2016, which were 0.8degC and 0.84degC above normal respectively.

Niwa meteorologist Chris Brandolino said people would have to wait until next week to see the climate agency's final numbers, but with the addition of Niwa's preliminary figures showed 2018 tracking extremely close to 2016's record. 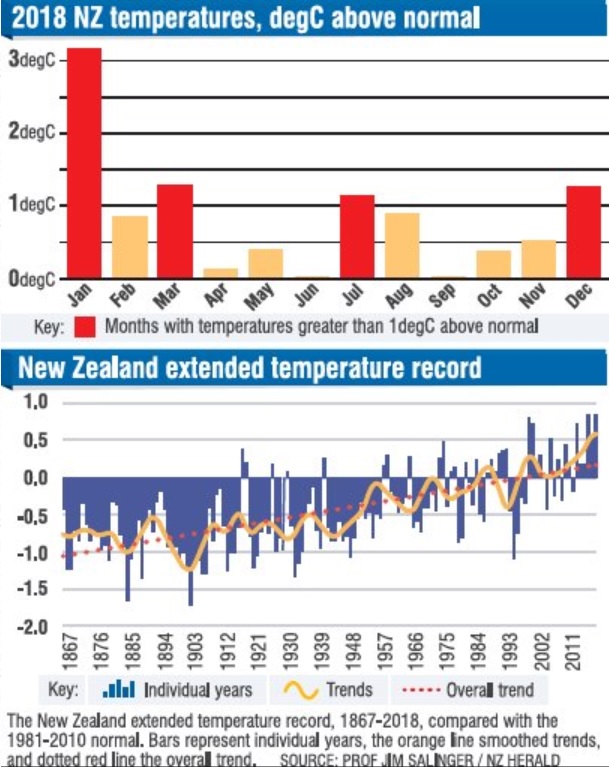 Last year got off to an unusually warm start with the hottest summer - and the hottest recorded month ever, January - on the books.

"January, March, July and December were all at least 1degC above normal, with January being a massive 3.2degC above average - the hottest month ever," Dr Salinger said.

The record warmth of 2018 was accompanied by warm seas around the country.

"For all months of the year sea surface temperatures around New Zealand were well above average, with preliminary estimates for 2018 being 0.8 degrees above average."

Even as 2018 began, it was in the grip of a marine heatwave caused by a freak combination of factors and which turned the Tasman Sea into a warm bath, fired the record summer, and lured swarms of jellyfish to our shores.

"The heat of 2018 was also demonstrated by the record loss of ice on the Southern Alps," he said.

"We measured a 9% drop in just one year. That says it all. We've never had anything like that in the glacier record."

Brighton Beach was filled with people making the most of the hot sunny weather on December 29. Unofficial temperatures soared to 31degC around Dunedin and the Taieri, but MetService's official high of the day was 26.4degC at Dunedin Airport, about 1pm. PHOTO: CHRISTINE O'CONNOR
Globally, 2018 was likely to be the fourth-warmest year ever recorded, with an average temperature sitting 0.6degC above the 1970-2000 baseline, and only behind the years 2015, 2016 and 2017.

"And more heating is predicted for 2019, by the UK Met Office," Dr Salinger said.

"Their 2019 forecast indicates that the year 2019 will be close to a record due to global heating and the added effect of the El Nino in the tropical Pacific."

Dr Salinger said that with six of our warmest years falling in the last two decades, the hand of climate change was unequivocal.

The average temperature had become 1.3degC warmer over 151 years of records.

He highlighted the UN's recent report warning that the world had little over a decade to limit global warming to 1.5degC above pre-industrial levels - and only around two decades to hold the Paris Agreement's symbolic 2degC line.

"We have to get going now and make significant inroads in the next years - there's now a global movement of youth calling for that."

Niwa's latest seasonal outlook, covering summer, predicted temperatures were equally likely to be near or above average until the end of February, and rainfall near normal for most regions.