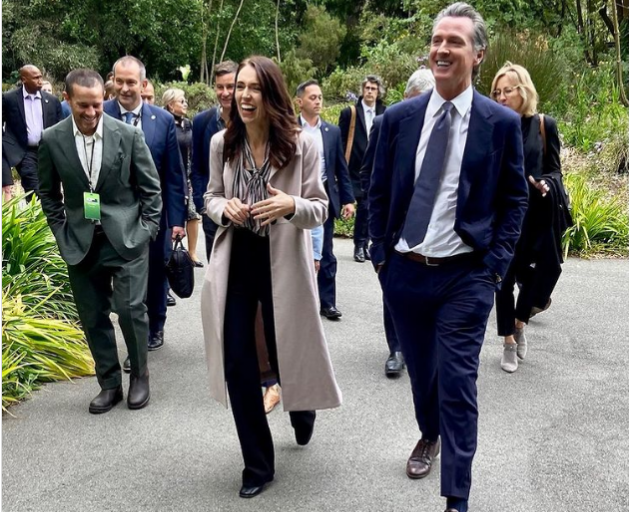 She is speaking to media from from the Seattle Aquarium, where she met Seattle businesses and dignitaries.

After meeting California Governor Gavin Newsom in San Francisco this morning she flew to Seattle for meetings with tech companies.

She met Adam Selipsky, CEO of Amazon Web Services, this afternoon to discuss Amazon's investment in cloud data centres in Auckland - a $7.5 billion investment to create 1,000 direct and indirect jobs.

Ardern said they were talking with the Ministry of Social Development.

She acknowledged unemployment was at a historic low but there were still people who are seeking work through MSD and seeking to return to the workforce.

"We have new protocols to hasten the speed of content being removed and to stop it being shared.

"That didn't exist at the time of our terrorist attack.

"We're seeing the areas where we need to do more to stop people using more sophisticated ways to share content that shouldn't be shared.

She said the Christchurch Call isn't just about people livestreaming horrific attacks, it was also about what we can do to prevent the radicalisation of people.

On her calling out tech companies during her Harvard speech yesterday, the PM said they were absolutely aware of what she'd asked.

"We all agree we don't want to see acts of terrorism that are seeded online."

She also met with Twitter this morning. It's response was really similar to the other tech companies.

Now it's about demonstrating that progress she said, relating to work around algorithms.

When asked about a potential ownership change at Twitter, she said Government would still continue the relationship regardless.

Earlier, Ardern met Newsom in San Francisco and signed off on a climate change agreement which will involve sharing technology and projects in areas such as electric vehicles and agriculture.

Ardern and Newsom - a Democrat many believe could be a contender for president - clearly hit it off.

Newsom began by praising Ardern's leadership after the Christchurch mosque attacks, and later said he was humbled and honoured that Ardern, as the leader of a country, had wanted to meet him as a state governor.

"You're quite a large economy," Ardern replied to laughter.

Ardern said New Zealand had put $2.9 billion into its Emissions Reduction Plan, and assured Newsom that was no small matter. Newsom had just said California's budget was $US47.1b (NZ$72b) .

She said she had invited Newsom to visit New Zealand and told him she hoped the agreement would help New Zealand met its Emissions Reductions Plan targets, especially in transport.

The Cash for Clunkers scheme announced as part of the Budget package for that plan was based on one already in place in California.

However, meeting that would depend on electric cars: "We need to source them."

Newsom said climate change was an "existential crisis" in California, which was experiencing bush fires and droughts it had not experienced a decade ago.

The event was held in the New Zealand garden area of the San Francisco Botanical Gardens - but the proximity of the Australian garden had led to the last-minute covering up of a sign that said Australia.

Ardern apologised to Newsom for the quality of the waiata singing by the business delegation: "It might not have been our best work but it came from the heart."

Newsom clearly was not too bothered by it - when the delegation sang again after Ardern spoke he jokingly asked why nobody had sung after he finished speaking.

Ardern said transport and agriculture emissions were issues for both New Zealand and California, which had similar emissions reduction plans.

"Gains here can be both good for business and the planet.

"We both aim to achieve net zero carbon emissions by the middle of the century. This agreement means we'll work together to share expertise and experience and collaborate on projects that help meet each other's targets."

The agreement is being pitched as opening opportunities for New Zealand businesses that can offer climate-friendly goods and services.

It coincided with the announcement of a deal between the NZ Merino Company's ZQRX and Silicon Valley tech platform Actual.

ZQRX is partnered with companies such as Allbirds and Icebreaker.

Ardern said the deal to help reduce the environmental impact of the industry was an example of the partnership she hoped the new deal with California would include.