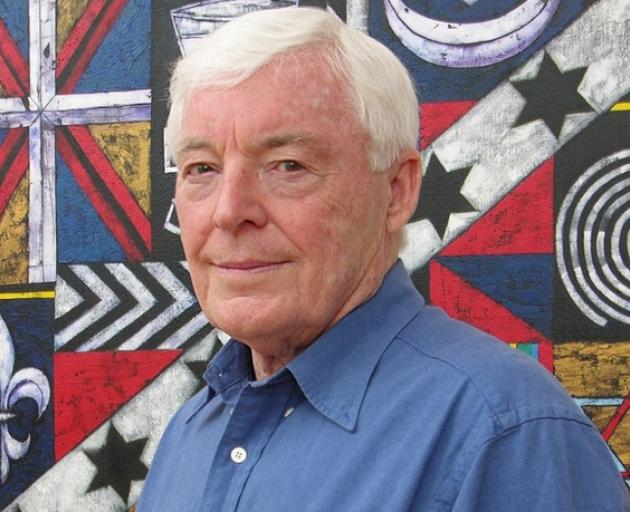 Robert Ellis' work was heavily influenced by Māoritanga. Photo: John McIver.
New Zealand artist Robert Ellis died this week at the age of 92, leaving behind a prominent body of artwork that brought together pakeha and Māori influences.

His artistic imagery can be found all around Auckland - Ellis' most visible work includes the stained glass windows of Holy Trinity Cathedral in Auckland, and what's been called one of the world's largest tapestries, hanging in the foyer of Aotea Centre.

The Auckland Art Gallery Toi O Tāmaki also holds many of his most famous pieces.

Art critic and author Hamish Keith knew Ellis for decades, and wrote a study of his work, Robert Ellis by Hamish Keith, which came out in 2014.

"As a painter he brought two cultures, the pakeha one and the Māori one, together. He'd say, 'you shouldn't be shouting at each other, embrace each other!'"

Ellis' work was heavily influenced by Māoritanga, as well as the landscapes of Tāmaki Makaurau.

Artists and art lovers throughout Aotearoa paid tribute to Ellis this week.

"My enduring memory of Bob will always be his engaging smile and the ever present twinkle in his eye, right up until the end at the age of 92," Gary Langsford of the Gow Langsford Gallery wrote on Facebook. "A true gentleman and scholar has now embarked on his next journey." 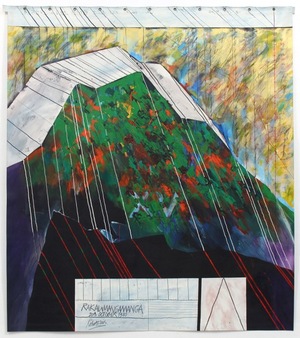 Born in England, Ellis came to New Zealand in 1957 to take up a position at Elam School of Fine Arts where he taught until 1994. He was appointed ONZM for services to Fine Arts in 2001.

Ellis came in the aftermath of World War II and a childhood growing up watching his country being bombed.

"He had no idea about New Zealand, none at all," Keith said. "He just wanted to get away from a destroyed society."

"When he arrived here he became a kind of sort of healer if you like. What he saw was two cultures glaring at each other."

"As an outsider he said, 'hang on, you've each got things to give to each other, get on with it.'"

Ellis first learned to drive when he moved to New Zealand and later created a series of paintings that presented Auckland's motorways and roads in abstract fashion, almost as if the roads were a hidden map of the world beneath the streets.

Many of Ellis' images feature impressionistic views of Auckland's motorways, maunga and waters.

"They're not really abstract to me, they're realistic paintings," he told RNZ in 2016. 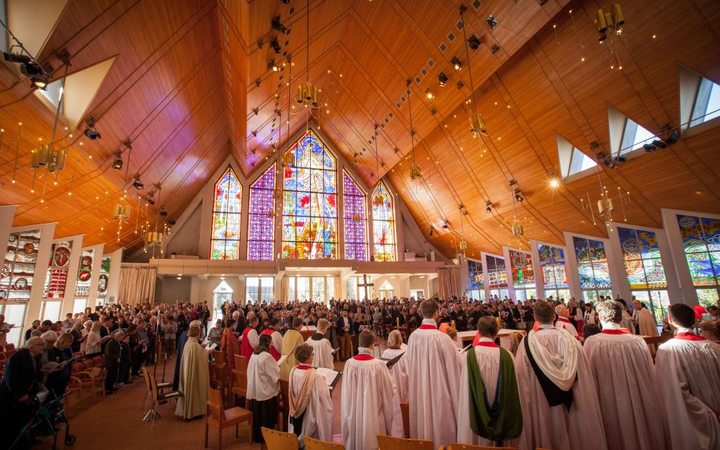 Ellis designed some of the windows, right, at Holy Trinity Cathedral in Parnell. Photo: Supplied

Ellis' work often harkened back to Māori concepts and the idea that Aotearoa had a much older, richer history than many at the time realised.

In his work Ellis would "carve up and reveal patterns there for hundreds of years, showing us what was there but we could not see," Keith said.

Ellis' work in prominent public spaces like Aotea Centre and Holy Trinity Cathedral gave him visibility beyond artists who could only be found in galleries.

"The thing that Bob was really, really good at is, you had a dream and he made it work," Keith said.

Speaking to RNZ in 2017, Ellis talked about meeting famed British artist Francis Bacon when he was a young painter.

Ellis said Bacon told him, "'You must work and you must be dedicated, otherwise you'll never be a painter.' And I thought well, that's the best bit of advice I've ever had from anybody. … So I decided that was going to be my credo."

Keith said that Ellis' work stood out in that era where Aotearoa was still figuring out its cultural identity distinct from the British Empire.

"Bob actually saw we were looking for ourselves and what we didn't really realise is, we had already found it."