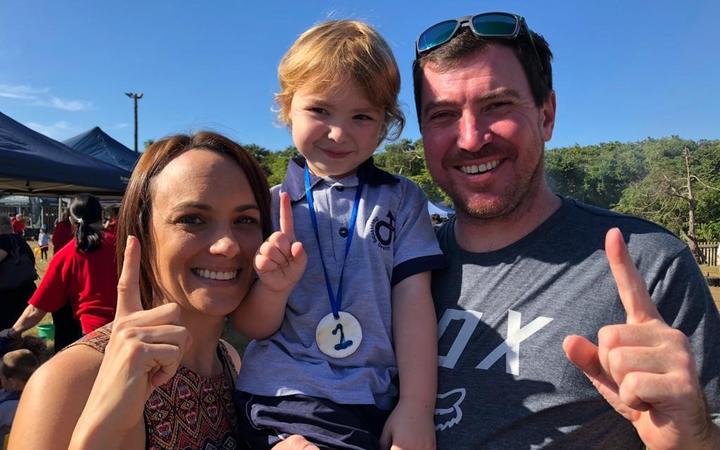 Caroline Waldron and Bart Constable with their daughter Olivia. Photo: Supplied / Caroline Waldron
Only 560 people qualified for a border exemption that the government announced in April to reunite split families.

Today, one man will get to hold his 18-month-old son, whom he has not seen since he was four days old.

Meanwhile, his family's friends are having to explain to their six-year-old girl why waiting on a visa decision meant she could not yet be reunited with her father while her friend is.

Olivia Constable has started doubting her Mum's promise that "we'll see Daddy again one day, but not sure which".

"She asked my friend Debbie whether the phone conversations she has with Bart on FaceTime 'is that pre-recorded, is it like a movie?'" said her mother Caroline Waldron. "Because it feels to her like they are saying the same thing every time. And if it's a recording of some sort she is listening to, and is her Dad actually dead?"

Waldron said Olivia no longer believed what she says about them joining her father, Bart Constable, in Ōāmaru, having missed milestones such as birthdays, first day at school, and Christmas.

Olivia is friends with Emmabella de Beer, who will this morning be reunited with her father Henco de Beer.

Along with her 18-month-old brother and mother Maryke, they were three of only 560 people granted border exemptions following a government announcement about split families in April.

The change allowed families of health workers, highly paid skilled workers, and those who had already applied for visas to come into the country. 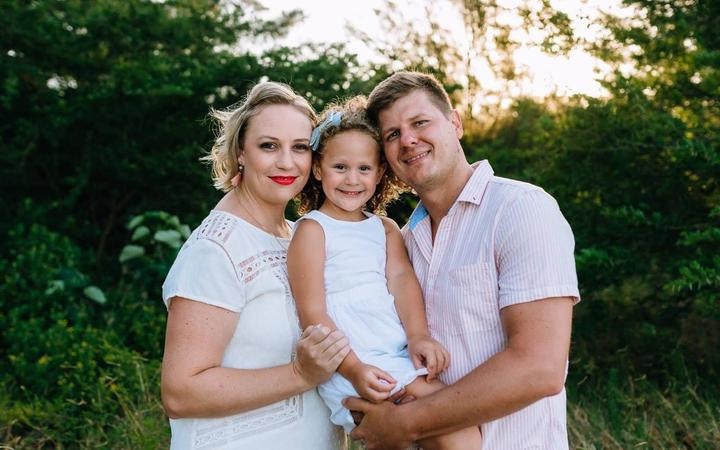 Henco de Beer, his wife Maryke de Beer, and daughter Emmabella. Photo: Supplied
De Beer said he had seen his family through a hotel window at a managed isolation and quarantine (MIQ) facility in Auckland and they would be reunited this morning.

"I actually went to go deliver some packages for them twice because you're allowed to make a delivery at security. And it's so nice. Like my wife was telling me 'No, don't drive, it's fine to order'. But for me, it was so special just to be able to do it," de Beer said.

"I was just on the outside, but I could actually see them through the window. And then I could stop for a second and just wave, and then I phoned them. So I had the sound and then I could see them and when I heard my son calling me - it really hit me. The excitement really caught me, the emotion when I could hear him and actually see him. That was very special. Because then I realised they are really here, they are literally a few metres away."

Today's emotional reunion will be followed by a trip to the waterfront before heading home to show them where they live and where Emmabella will go to school.

"I've always said that it will take a miracle to get them into New Zealand at this stage, so for me to actually see them will really be like your biggest dream, there's nothing more that I want in my life than seeing my family. I don't even have words to describe it. It will literally be the best moment in our entire life. This is something that we will always remember."

But his happiness was tinged by knowing how many families did not meet the criteria and whose lives were falling apart.

"There are hundreds of families who deserve to be together," he said. "I don't want people to think it's been resolved. I have made so many friends throughout this year and a half and they are in the exact same position as me. The only difference is their visas were still in processing. And these poor families have no timeline.

"I know of many people who are going through divorce cases, families falling apart, and children who are seeking psychological help, children who refuse to speak to their parents, getting up to nonsense, being involved with the wrong groups of friends. And these are good people, but the position has really, really warped their lives into a whole different direction."

The number of split families is hard to calculate, but Immigration New Zealand (INZ) received 6559 requests for border exceptions on humanitarian grounds between August and April. 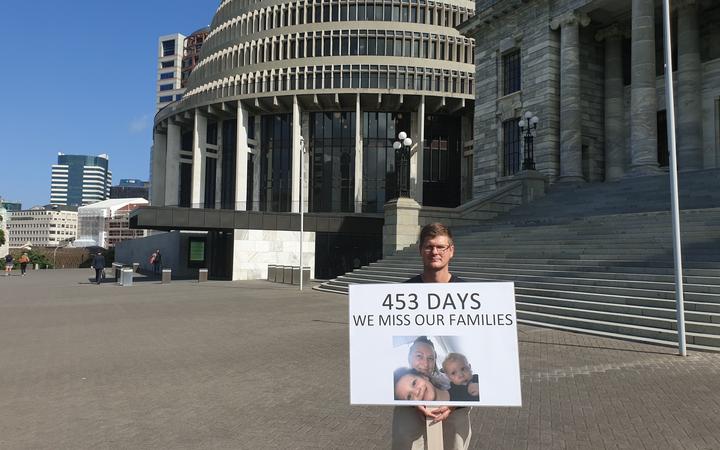 Henco de Beer stood outside Parliament earlier this year, calling on the government to allow migrants' families to be let in. Photo: RNZ
Patrick Tedeschi was "filled with hope" when he heard about the exemption for families of highly skilled workers, because as a senior software developer at Xero, his skills were very much in demand.

But INZ ruled his skills did not entitle his family to exemptions, and his wife and five-year-old son remain in Brazil.

Tedeschi was not alone, according to National Party immigration spokesperson Erica Stanford.

"The figures are very low. Everyone's being declined because they don't have unique skills, so the threshold for getting your family in under that category is much, much higher than those coming in for the very first time as a critical worker," Stanford said.

"The other group is the ones who had to have a visa to travel before the border closed. So some of them are coming through - but the vast majority didn't have visas to travel, they were in the process of getting them.

"We were hoping that they were going to be more generous and we're certainly calling for them to be more generous, because there are hundreds of people out there, hard-working, skilled people who haven't seen their families in coming up to 18 months."

Immigration Minister Kris Faafoi has been approached for comment.