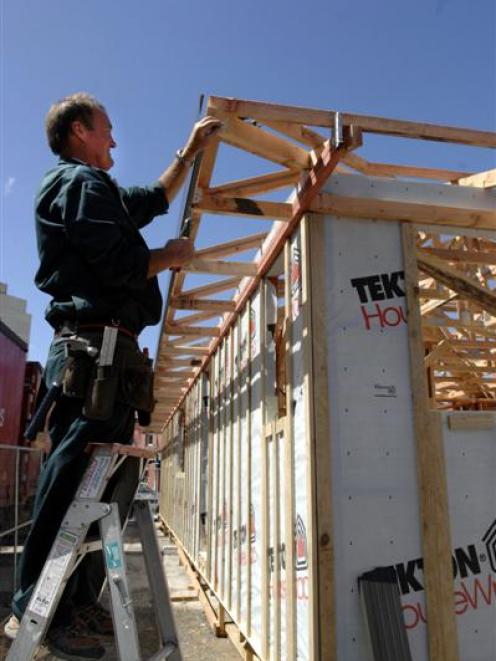 From March 1, most residential construction work which already requires building consents will need to be undertaken by licensed building practitioners. Photo by Linda Robertson.
A legislation change to ensure building practitioners are licensed for the construction work they carry out on houses will bring better accountability to the sector in the wake of the leaky homes scandal, industry authorities say.

The Department of Building and Housing has launched a two-year campaign which is aimed at improving the quality of building in New Zealand and increasing the confidence of consumers, - just weeks before a legislation change takes effect.

From March 1, most residential construction work which already requires building consents will need to be undertaken by licensed building practitioners.

The change is one of several which were made to the Building Act in 2007 to encourage better building design and construction standards, after consumers were left bearing the leaky home consequences created by unregulated tradesmen.

There was a range of trades which fell into the categories of licensed building practitioners, she said.

A category of "restricted building work", which will predominantly have to be carried out by licensed building practitioners, will apply to structural work considered crucial to the integrity of a building.

Registered architects, gas-fitters and plumbers, as well as chartered professional engineers - given they are already registered with their own professional authorities - will be treated as already being licensed, she said.

A registrar of licensed building practitioners will be kept in Wellington and regular competency assessments will be carried out as part of an industry move to regulate professional development, Ms Geddes said.

Most industry practitioners were aware of the changes, but it was also important anyone considering any "DIY" work on their home knew about the new requirements, he said.

Once the legislation change took effect from March, building consent applications would not be accepted unless they included a certificate of work memorandum from a licensed building practitioner which certified the design work complied with the amended building code.

However, Ms Geddes said she did not expect the legislation change to affect DIY renovators, given the type of design and construction work defined as "restricted work" was of a more technical nature, which required building consents.

The changes were designed to ensure prospective buyers would have an assurance the work being completed was up to the required high standards, she said.

Parliament was considering the Building Amendment Bill, which might bring in an exemption for home renovators allowing restricted building work to be carried out by DIY enthusiasts, Ms Geddes said.

Mr McLeod said the onus would fall on homeowners and licensed building practitioners to do certain structural and weatherproofing renovations "the right way".

There would be a "small increase" in the amount of red tape building practitioners and renovators would have to comply with, once the legislation change took effect, he said.