The damaged Ferrari is believed to have sold at auction in October for at least $50,000. Image: Supplied
A careless driving charge laid against a man who crashed a $290,000 Ferrari in Auckland's Victoria Park tunnel while on a test drive has been dropped.

The driver caused extensive damage to the luxury vehicle in July 2019.

But police said they would be offering no evidence against the man at his appearance at Auckland District Court today.

Judge Ryan dismissed the charge and granted him permanent name suppression due to extreme hardship.

It's believed the car sold at auction through Turners for at least $50,000.

The official crash report released to the Herald under the Official Information Act says the Ferrari was travelling in a straight line when it lost control and the car began to swerve - "indicating that the driver has done a sudden increase of speed or manoeuvre while revving the vehicle's engine, causing it to lose control".

CCTV reviewed by police showed the car was travelling "slightly faster" than other cars in the area - estimated at 60km/h, in an 80km/h zone - but excessive speed was not a factor. The road was wet at the time. 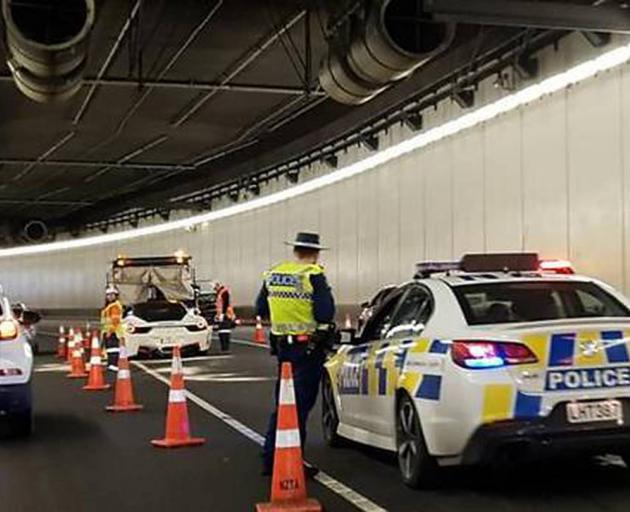 The crash in the Victoria Park tunnel caused lengthy delays for northbound drivers. Photo: Matthew Theunissen, RNZ
The white 2013 Ferrari Italia 458 coupe was for sale at luxury car dealership Continental Cars in Newmarket at the time of the crash.

The crash file says the driver was heading north and was in lane 1 when "all of a sudden the car started to swerve prior [to] Victoria Tunnel", the attending officer wrote in his notes.

"[REDACTED] managed to keep the car as close as to the left lane to avoid the other traffic. As a result, he hit the left barrier a few times before coming to a stop in lane 2."

The report contains no witness statements except those of the driver and their passenger - believed to be a salesperson from Continental Cars.

"I was doing a test drive of a Ferrari motor vehicle," said the driver.

"Before the Victoria tunnel, the car slipped and I tried hard to control it and kept as close as to the left side of the road to avoid the traffic. It hit the barrier a few times before coming to a stop in lane 2."

The passenger told police they did not remember much from the crash.

"I was on my phone before the crash. All of a sudden, our car started to swerve and hit the barrier a few times," the passenger's statement said.

Neither the driver nor his passenger was injured. Both were wearing seatbelts and the driver's airbag deployed.

No breath test or drug testing was carried out as impairment was not suspected.