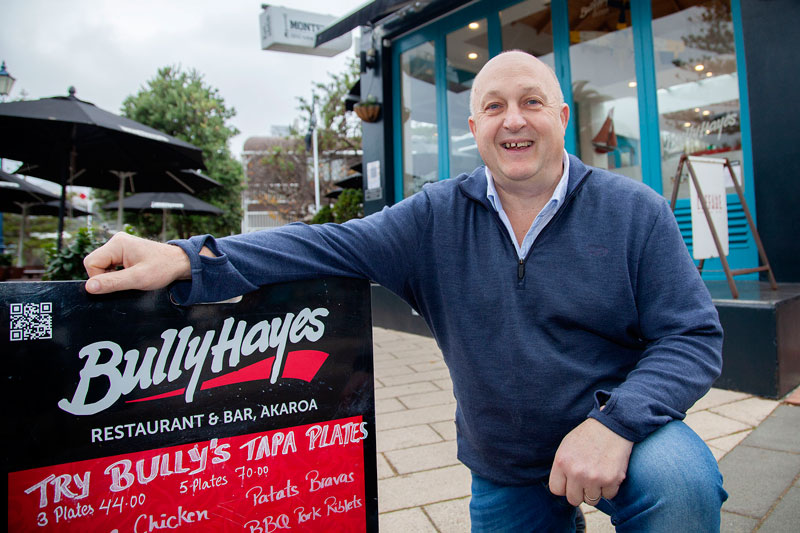 Bully Hayes Restaurant & Bar in Akaroa is set to change its controversial name in October.

Meanwhile, its owner Wayne Jones has been changing the name on the sign at the front of the restaurant to the pubic's suggestions.

Jones said a new name has not been chosen yet but some of the names that have been written on the sign above its door include Jonesy's, Hilly Bays and Wayne's World.

The restaurant, which has been called Bully Hayes for 25 years, came under fire in June.

Historian Scott Hamilton called its name out for glorifying Bully Hayes, a 19th-century American ship captain, and ignoring the crimes he inflicted on the Pacific, including human trafficking and abducting and raping young women and children.

Calls for the name change came in light of the Black Lives Matter movement protesting the death of George Floyd, who was killed when a Minneapolis police officer knelt on his neck.

The same week Jones agreed to change the name the statue of 17th-century slave trader Edward Colston was pulled down by protesters in Bristol.

Jones said this will happen at the same time as its menu is altered to save money and avoid having to make both changes at separate times.

Said Jones: "We're probably going to choose something probably early [or] mid-October when we do our menu change so we are going to probably tie it into that."

Akaroa residents have been suggesting new names for the restaurant, but Jones said Bully Hayes is still the preferred option for most.

"The majority of the suggestion box was probably 99 per cent don't change it."

He said Bully Hayes' branding will change regardless of this to account for those who view it as offensive.

"What we are going to do is really appease one or two that are not happy but also going to appease the 99 per cent who don't want the change to come up with a scenario that everybody's happy with and we can still go forward and still be here in 25 years time."