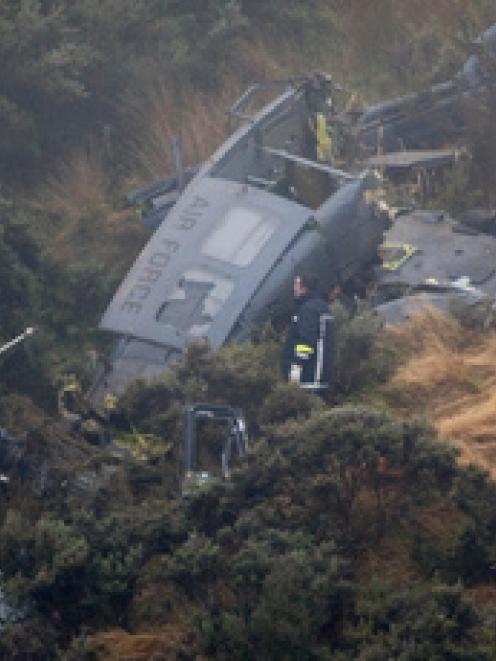 Three men died and one was seriously injured when the RNZAF Iroquois helicopter crashed near Pukerua Bay. Photo / Mark Mitchell
Three airmen killed in an Anzac Day helicopter crash were on a one-hour flight in pre-dawn darkness partly because it was considered too expensive to accommodate them in a hotel the previous night, says a leaked report.

The doomed flight on the morning of April 25, 2010, would not have taken place if the crew had flown to Wellington, for dawn services, the day before.

Instead, the air force Iroquois helicopter, one of three flying in formation, took off from Manawatu early on Anzac Day, with the crew using night vision goggles - something for which they were later found to have been inadequately trained.

The helicopter crashed at 5.49am, 36 minutes into the flight, killing three men and seriously injuring another.

The air force's internal accident analysis report says: "The need to minimise accommodation costs incurred by 3 Squadron due to pressure on the accommodation budget was recognised and contributed to the ... decision (not to fly the day before)."

The Defence Force uses the Amora Hotel in Wellington, which last night had rooms available for $149 each.

It found there were no instructor manuals or guides because of "resourcing" issues.

This was "common with most RNZAF flying units".

The report said four of the six pilots in the three helicopters did not have adequate flying qualifications for the flight, and the lead pilot was not qualified to lead the formation.

It found widespread problems throughout the air force which meant it was unable to "adequately and reliably ensure safe and effective military air operations".

The report found knowledge of problems went to the top of the command chain.

The Chief of Air Force at the time of the accident, Air Vice-Marshal Graham Lintott, was last year promoted to be New Zealand's defence attache in Washington.

Wellington Airport rules restricting flights arriving or taking off before 6am were also cited as a factor, although the report said "permission could have been sought" for such an arrival.

The emergence of hotel costs as a factor in the accident led to calls last night for Defence Minister Jonathan Coleman to resign.

Labour defence spokesman Iain Lees-Galloway said: "National's cost-cutting is clearly a factor in this tragedy, and the minister needs to be held accountable for that.

"It is abhorrent that air force personnel felt under such extreme pressure to save money they were willing to compromise safety to save $600." That figure is based on the cost of rooms for four crew members.

Green Party defence spokesman Kennedy Graham said the NZDF needed to give a public assurance over the safety of its staff.

"Obviously service in the defence force comes with risk - but not this kind of risk."

The air force last night refused to comment on the accident analysis report, saying to do so would "legitimise the unauthorised release of this evidence of the court".

The refusal is a contrast to advice from media specialists to defence chiefs before the official report into the crash was released last year.

They were told questions about the "defence force investigating itself" could be rebutted with reference to the accident analysis report.

Instructions included saying the official investigation was "based in large part" on the report which was "prepared by the RNZAF's most experienced air accident investigator".

Last night he refused to be interviewed on the crash, but a spokesman cited two inquiries he had ordered.

The States Services Commission is investigating the air force response to safety recommendations, and the former Department of Labour's failure to carry out a workplace safety investigation.

The survivor, Stevin Creeggan, is seeking permission from the courts to prosecute the air force under health and safety legislation.