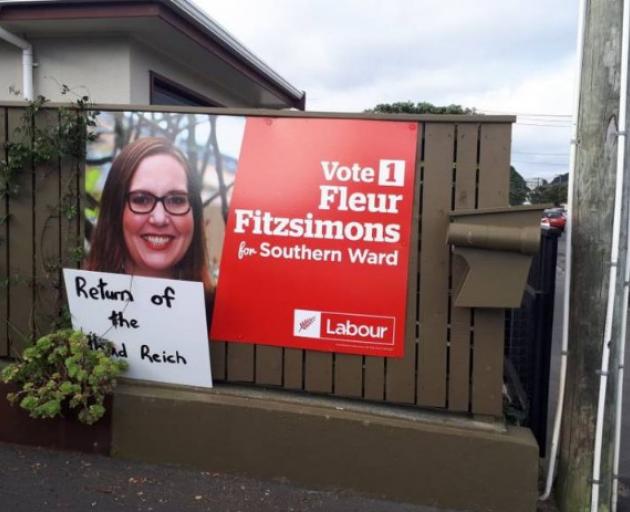 The sign left on Fleur Fitzsimons' fence has been widely condemned. Photo:Twitter
A Wellington Southern Ward candidate is calling for an apology after finding herself the victim of a Nazi slur.

About 500 people gathered in Island Bay yesterday to march in protest against the latest plan to fix the suburb's controversial cycleway.

The Wellington City Council wants to spend $4.1m on what it calls a "common-sense" solution.

But the Island Bay Residents' Association is not in favour of the plan, and wants to see the suburb's parade returned to how it was.

Fleur Fitzsimons lives there and is standing for Labour in the Southern Ward byelection.

She said she did not attend the protest but found a sign left by her fence afterwards.

It read "Return of the Third Reich".

Fitzsimons said she was shaken and was with her daughter at the time.

"It's such a vile comparison and we should never use such horrific comparisons in politics in New Zealand."

Fitzsimons said she supported the right to protest but making comparisons with the Nazi regime was completely inappropriate.

"If I was organising the protest I wouldn't have tolerated a sign like that in my protest and I think that the people who organised it, or are responsible for the sign, should have a long hard think bout it and apologise."

Fitzsimons said she wanted a formal apology to the people of Island Bay.

Wellington Mayor Justin Lester commented on the post, calling it incredibly disappointing behaviour that no family should have to put up with.

Others have called it shameful, inappropriate and offensive.

Fitzsimons said she had spoken to a representative from the Island Bay Residents' Association.

"She was lovely and was also appalled by this and apologised that this has happened."