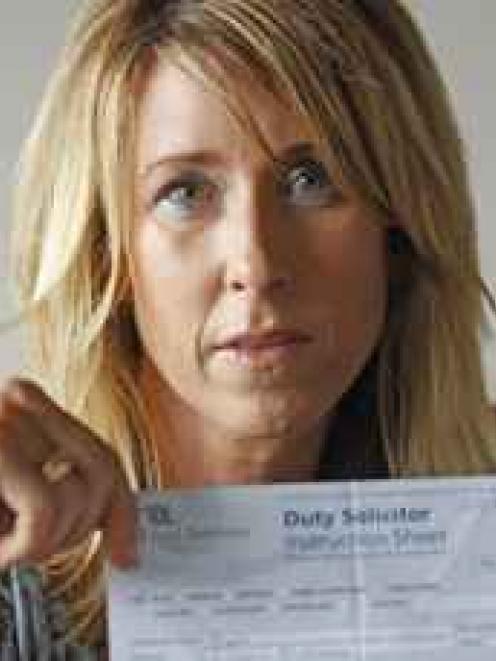 Angela Hughes with the wrongly dated official document that resulted in her being locked in a cell. Photo by Richard Robinson
A mother of two was arrested, strip-searched and locked in a cell after a district court paperwork error caused her to miss her scheduled appearance on a driving charge.

Angela Hughes, 42, went to Waitakere District Court on February 10 - the date specified in an official document given to her at a first appearance last month.

But court records showed she should have been there on February 9, and a warrant had been issued for her arrest.

Her lawyer told her the best thing she could do was go to the police and explain what had happened.

"I'd never been to court in my life," she said yesterday. "I thought, 'Well, it can't be that bad', and went to the police station with my piece of paper."

Mrs Hughes, who was facing a charge of careless driving causing injury, told an officer about the date mix-up.

But he said a warrant had been issued and she had to be processed.

"They took me out the back like a common criminal. They were very nice to me but said, 'I'm sorry we have to put you through this'."

She was questioned, stripped of her jewellery, searched - which included lifting her bra up - and asked to give a DNA sample, which she refused to provide.

"I said, 'No, I'm not a criminal. I shouldn't even be here.' I showed them my paper but they wouldn't even look at it."

Two officers drove her back to court.

Mrs Hughes, who lives in Kumeu, said she repeatedly asked the officers to look at the district court document given to her, but they didn't want to know.

"I couldn't breathe. I had my eyes closed and I was howling. I opened my eyes once they closed the door and found three rough girls in there. I was freaking out thinking, 'I can't let them see I'm upset. I have to be strong.'

"I was dressed in high heels, dressed to the nines ... and they were in their slippers and their ugg boots ... I was really scared for my life because they were bashing on the door and trying to get the guard to come.

"The whole time I was thinking that if I was being done over, no one would be coming to the rescue."

After an hour, Mrs Hughes was taken to a room with jail bars between her and a lawyer.

"I had tears streaming down my face and held up my paper to the jail bars and said, 'Nobody will read my paper. It's a court error'."

While the lawyer went to make inquiries, a Salvation Army volunteer held her cellphone up to the bars so she could speak to her husband.

Eventually, Mrs Hughes was taken upstairs to the courtroom.

"I had to walk through everyone who was waiting. I was just howling but I couldn't stop, and I had makeup running down my face."

Mrs Hughes' court appearance was over in minutes. She was remanded to appear again this month. An official called the mix-up a "clerical error".

Mrs Hughes says the experience has left her traumatised and unable to sleep. "I wouldn't want anyone to go through the same thing."

Yesterday, following Herald inquiries, she received a formal apology and was told steps were being taken to prevent such an incident happening again.

District courts regional manager Nichola McKinney said the Ministry of Justice was looking into every aspect of the incident.