The teen brothers who died in a crash as they fled police in Christchurch were the nephews of a man who shot and killed a 22-year-old in the city centre in 1989 before turning the gun on himself.

The boys' father has spoken out about the fatal crash and the link to his killer brother - and urged people not to judge his children for the sins of their relatives.

Glen and Craig Mcallister died after the car hit police spikes, crashed into a tree and went up in a "huge ball of fire" on Sunday night.

Craig was 13 and Glen had turned 16 two days earlier. 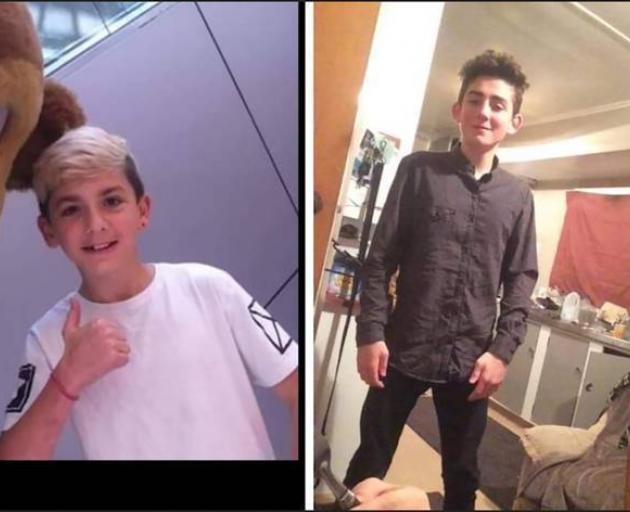 The younger Glen and Craig are named after their father and uncle.

Early on October 4, 1989, Craig Mcallister dropped off his brother - armed with a pump-action shotgun - in the square.

He then walked 80m to a police kiosk that was in the square at the time and turned the gun on himself.

Glen Mcallister had been released from prison just 10 days before he shot Motz at random.

Craig Mcallister yesterday spoke about the loss of his sons and asked people not to judge them or the rest of his family for his or his brother's past actions. 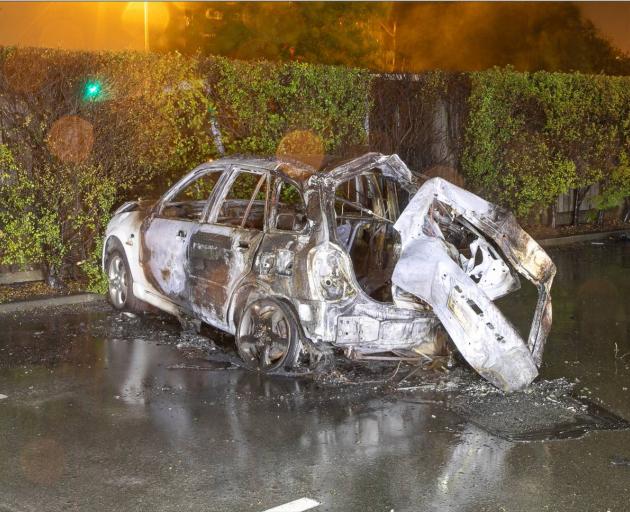 The burnt-out wreckage of a car that chrashed on Blenheim Road. Photo: Supplied
He said his sons were good boys but conceded they had been involved in police pursuits and had stolen cars in the past.

"They were just kids," he said.

"They were just boys doing what boys do.

"I knew as soon as this happened what was going to happen with me, with my name - that my brother was going to get brought into it.

"It's not relevant. The police killed my kids.

After the crash, Canterbury district commander Superintendent John Price said police had pulled out of the pursuit.

"Ultimately, police are here to protect our community. Our staff must strike a balance between the responsibility to protect life and the duty to enforce the law."

The investigation into the crash has opened.

He claimed he had to choose between dropping his brother - who he says had schizophrenia - off in the square with the gun, or a "residential area full of people".

"I had no choice ... but after my brother died I pulled out of the skinhead club.

"I was drug-addicted for 15 years after my brother died, but I got myself clean.

"I've been working my whole life since. My boys had a good life.

"I never let my children meet any skinheads. They were horrified when they heard stories about what I used to be like. They can't believe it was the same person."

Craig Mcallister said dental records were being used to identify the three boys due to the severity of the crash and fire.

It is thought Glen was driving.

"They had been doing skids out the back of their mother's place about half an hour before the crash," he said.

"Glen went with them because he wanted to protect them from getting into pursuits and fights. He was trying to keep them safe."

Craig Mcallister said despite his skinhead background and his brother being a murderer, he did not want his sons judged harshly.

"Yeah, they stole a car, but they just did not deserve to die."

"It just put an absolute chill down my spine when the names came out," she said.

Ms Motz-Wallace hoped people would consider the Mcallister family history before donating to an online page set up to fund the brothers' funerals.

"I know this woman lost her children, but I just don't believe the money is going to a good place. It's unbelievable ... and they did nothing to help us when my brother was killed. We had no support like that. We had nothing."

So... they were good boys but the police killed them. No doubt they were also respectful, considerate and honest. Oh, hang on, they were speeding in a stolen car.

This is how such people justify themselves.

Make no mistake, the police did NOT kill these people. The sustained and stupid actions of the driver killed all these people. Excuses of "boys doing what boys do" are just that, excuses. Nobody tolerates such excuses if they are made to excuse domestic violence so why tolerate them for other crimes?

They were killed by bad parenting.

My sympathy lies with the police that attended this situation and their families. They risk their lives daily to provide security to the rest of us. Then they have to deal with the psychological trauma of attending this sort of situation. I am also incredibly grateful that no innocent passers by where hurt. Thank you to all the front line police that have to deal with this sort of thing far too often.

Why do people keep using "boys will be boys" as an excuse for inexcusable behaviour? I know a lot of teenage boys who manage quite well not to steal cars and race them a breakneck speed around town with no regard for anything but their own thrills. I really don't think their gender is the issue here.