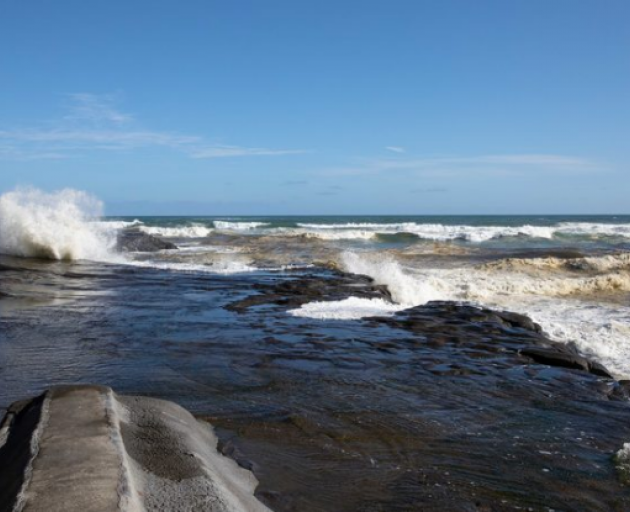 Muriwai Beach the day after a Burmese couple drowned while fishing off the rocks. Photo: RNZ
A study on drowning cases has found a majority of missing people in New Zealand weren't wearing a lifejacket when found, reinforcing the importance of safety equipment.

The University of Auckland study, deemed the first and largest of its kind in the world, reviewed 219 fatalities from 2008 and 2017.

It showed only four percent of missing people were wearing a lifejacket when found, and males made up 92 percent of those missing.

Only a small proportion of missing people weren't located (9 percent) or the outcome not reported (6 percent), according to the report.

Study spokesperson Dr Jonathon Webber, of the University of Auckland, said the principal purpose of the research was to clarify how long it took to locate the bodies of people who went missing in the ocean, and how far the bodies were displaced from the point of entry into the water.

He said the study found that the bodies of most missing people (58 percent) were recovered within 24 hours of searches commencing and 64 percent were located within 1km of where they disappeared.

"That second statistic was unexpected, as was the finding that most of the incidents - 47 percent - occurred on the east coast of the North Island. You might have expected the west coast, which has much more challenging surf conditions, to top the list - but that wasn't the case."

The study also found the median age of drowning victims was 41.9 years. In terms of ethnicity, 37 percent were European New Zealanders, 12 percent were Asian, 24 percent were Māori and 19 percent Pasifika.

Dr Webber said the latter two were over-represented in the statistics compared with their percentages in the population, perhaps due to activities of food gathering and fishing.

"Some of the locations for those activities, for example off the rocks are extremely dangerous places. We've had historic incidents of boats that have been overloaded and not carrying the appropriate safety equipment," he said.

The most frequent activities the victims were involved in before going missing were boating (31 percent), swimming (20 percent), fishing (18 percent) and diving/snorkelling (16 percent).

"It really reinforces the message that people on boats should be wearing a lifejacket where possible and potentially if they were, we would see fewer drowning of lives in these kind of activities."

Dr Webber added that limitations in the study design meant it was difficult to tell whether the missing person was recovered offshore or on the coastline, and a number of other variables weren't clear or well-documented, he said.

"Future research in this area, coupled with better on-scene data collection, could better inform real-time predictive modelling of where and when a missing person is likely to be found."

"It reinforces our belief that the loss of life around our coastlines is a nationwide problem that needs attention. Drowning is a wide-ranging issue that impacts all ages and demographics, and it continues to have a significant toll on our communities."

Wearing a life jacket when on the water is the same as wearing a seat belt in a car. You have to be terminally stupid not to do it.