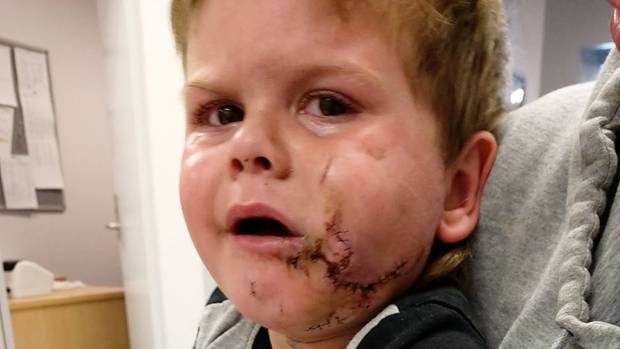 Maxin Bennett's injuries were so severe he was flown to Christchurch Hospital. Photo: Supplied via NZ Herald
A 2-year old Christchurch boy suffered horrific injuries when he was attacked by a dog at a party, leaving him with life-changing injuries.

The family members who witnessed the attack are still traumatised, the toddler's distraught mother says.

Maxin Bennett had travelled with his mother Alana Trainor from Christchurch to a party in Hastings on March 14.

After the long drive, Maxin's mum went to a bedroom on the property to sleep while her parents watched Maxin ride his bike along the driveway.

"My mum came screaming up to me that the dog had attacked my son.

"By the time I got out there my dad had him in his arms," an emotional Trainor told the Herald.

She said she was shocked when she saw the extent of his injuries.

"The left side of his face had been ripped right back and you could see all of his teeth."

Trainor didn't wait for an ambulance, and instead loaded her son into a car and drove to Hawke's Bay Hospital in Hastings.

Trainor says she was told at the hospital that Maxin's wounds were the most severe dog bites they had seen.

The pair were then transferred by emergency flight to Christchurch Hospital for surgery.

Trainor told the New Zealand Herald that the effect of the attack on her family has been severe.

"My dad still breaks down about the state of my son when he picked him up. He said he can't get the image out of his head," Trainor said, revealing that she also struggles with the physical toll it has taken on her son.

"I have my up and down days," Trainor said. "I'm scared he's going to get a hard time about the scarring when he's older."

She said doctors are "not quite sure" if there is nerve damage and he faces ongoing surgery as he grows.

Maxin is now aware of the damage he has received.

"He's only in the past couple of weeks now seen it. He was looking in the mirror the other day and he's now just discovered it," Trainor said.

She said he's distressed by his injuries, which he referred to his as his "ouchies".

The family have two staffordshire terriers and Maxin is still comfortable with them, but has taken to smacking them since he saw his scars.

Trainor said he now shrinks away from strange dogs.

"He gets scared and cuddles into my leg," she said.

Trainor initially believed the dog that bit her son was destroyed after the attack, but learned two months later that it was still alive.

She then lodged a complaint with the Hastings District Council.

He says that, when asked about the delay, the complainant said they understood the dog would be put down by its owner, but that didn't happen.

"Council has been attempting to investigate the matter, but no formal statement has been provided yet, and an investigation is still pending.

"Council did seize two dogs from the owner's property on June 10 but had no grounds to hold the dogs and they were released on June 11 on strict conditions," he said.

Payne told the Herald those conditions include the dog not being allowed to leave the property, unless in an emergency, and inspections by council.

The Herald contacted the owner of the property, who refused to comment but denied his dog was responsible for the attack.

Trainor said that anyone who knew more about the dog that attacked her son should come forward.

"What if it does it to somebody else and it does way more damage, or even kills a kid?

"What if it was their kid?"