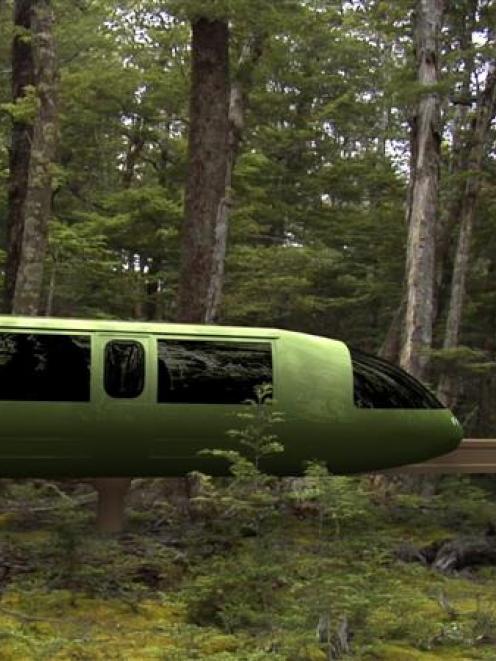 An artist's impression of the Fiordland monorail. Supplied image.
Plans for a $240 million Fiordland monorail have been derailed by Conservation Minister Nick Smith, who says the project does not stack up economically or environmentally.

The announcement was widely welcomed, but Riverstone Holdings - the company behind the plan - says the reasons given for the decision are flawed.

Dr Smith said this afternoon an independent tourism and financial analysis  concluded the project was not viable.

"There would be  a significant impact on the area's flora, fauna and natural heritage," he said.

"The route is not sufficiently defined to properly assess the impacts."

The Fiordland Link Experience proposed a new link between Queenstown and Milford Sound consisting of a 20km boat excursion across Lake Wakatipu to Mt Nicholas Station, a 45km all-terrain vehicle ride to Kiwi Burn, a 43.8km monorail ride to Te Anau Downs and a 90-kilometre coach journey to Milford Sound.

The application included a lease, licence and concession for the monorail and related infrastructure through the South West New Zealand World Heritage Area including the Snowdon Forest and Fiordland National Park.

Dr Smith said the monorail plan had more merit than the Miford Tunnel proposal, and had been a more difficult decision to make.

"I have visited the site twice, met its applicants twice, consulted with the New Zealand Conservation Authority, and spent days reading the relevant reports and responses from the applicants," he said.

Dr Smith said he did not want the decision interpreted as the Government and the Department of Conservation (DOC) being opposed to any proposal for alternative access options in Fiordland.

"The door is still open but proposals will need to be both environmentally sustainable and economically viable."

"We have proven our commitment to the environment and this project at every step and our plans have been vindicated by experts. To have our application face constant delays and ultimately end up with a decision being made months out from a national election is incredibly disheartening," Mr Robertson said.

"We recognise that there will always be opponents of innovative ideas, but having stuck to this process in good faith, and incurred costs of over $5 million, this is a tough pill to swallow. No business should have to suffer a process like this."

Mr Robertson said reasons given for the decision were deeply flawed.

"The Minister has ruled that he could not be satisfied the project would be financially viable - a decision based on studies he commissioned that two independent expert assessments, commissioned by us, judged to be manifestly wrong as their conclusions were based on old data and made a series of assumptions that could not be justified."

Economic viability could not be truly established until extensive engineering design had been done, a detailed business case had been developed and funding was sourced. That would take at least six months, and would cost hundreds of thousands of dollars, he said.

"To that end, we proposed the following condition regarding the project's viability be included: ‘That the project has been the subject of a robust due diligence process certified by a qualified third party and has subsequently secured all capital (equity and debt) to successfully build, complete and fund the ongoing operations of the business'."

Members of the Save Fiordland group had gathered at the Olive Tree Cafe in central Te Anau and eagerly awaited the decision on an idea which had consumed so much of their time over the past two years.

When word came the monorail had been refused there were sudden gasps of joy from Manapouri's Ruth Shaw, who is on the group's committee.

"It's two years of hard work but it's paid off."

Forest and Bird welcomed the decision, saying it was great news for the World Heritage Area.

"The monorail plans were unrealistic from the beginning, as there is no way the applicant could have restored the old growth forest, tussock grasslands or wetlands the project would have destroyed. It could also have been catastrophic for the bat population," Otago Southland field officer Sue Maturin said.

DOC needed to finish the job it started years ago and classify all stewardship land.

"If it had done, the monorail developer would have been saved the cost of getting his proposal this far. And it would have saved community groups likes Forest & Bird the time and expense of advocating for the protection of the Snowdon Forest."

Federated Mountain Clubs of New Zealand president Robin McNeill welcomed the new approach the Minister took in assessing the ability of the applicant to undertake the work and make a go of it.

"This is something we have wanted for a long time. Too often, dumb ideas go too far and waste everyone's time before they get stopped because they were never going to be economically viable".

"The monorail would have had a major impact on a special part of Fiordland which is a mecca for trampers and visitors to New Zealand," she said.

"New Zealanders were loud and clear in their opposition to this, with thousands signing a petition opposing the Monorail.

"I am delighted that the Monorail has been stopped in its tracks."

If it went ahead, the monorail development would have been the largest concession ever granted on conservation land.

A hearing commissioner recommended in November that the project should go ahead with extensive conditions.

Green Party Co-leader Metiria Turei said the decision showed the voices of New Zealanders who loved and protected the environment could be heard loud and clear.

"More than 18,000 people signed Save Fiordland's petition to protect the Te Wāhipounamu South West New Zealand World Heritage area and stop the monorail, and now the Government has finally listened," she said.

"This is another case of New Zealanders standing up to protect the places we love, and winning."

Mr Simmons agreed: "I am so glad that this beautiful area will be preserved for future hunters and trampers to enjoy like we have for generations."