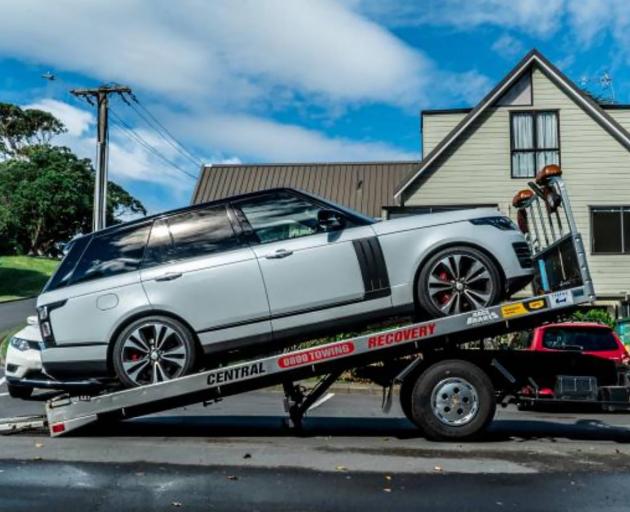 Four Range Rover Sport worth $150,000 each were seized from Comancheros members in Operation Nova. Photo: Supplied
A $10,000 gold chain and a $13,000 Louis Vuitton bag are among the millions of dollars of luxury items seized from the Comancheros motorcycle gang.

New details of the frozen assets, restrained following a police investigation into alleged drug dealing and money laundering, listed in documents held on the court file have been released to the New Zealand Herald.

Senior members of the Australian gang, including the New Zealand chapter president Pasilika Naufahu, as well as a lawyer, accountant and media personality were arrested in April at the termination of Operation Nova.

Nearly $4 million of assets were frozen including the $1.6m home in the exclusive east Auckland suburb of Bucklands Beach where Naufahu - who has pleaded not guilty to all charges - was living. 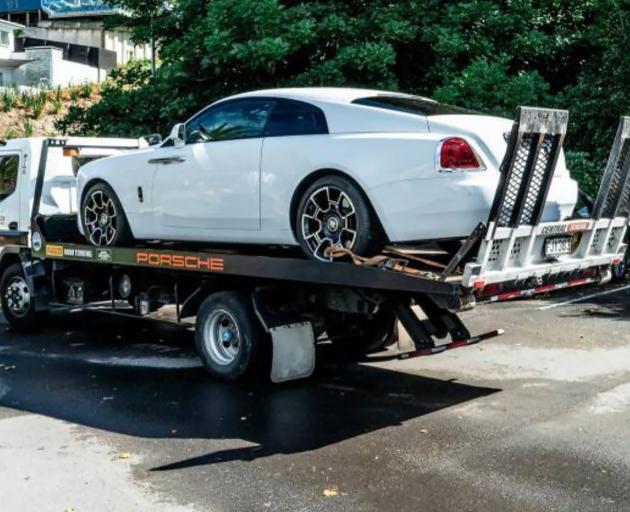 A Rolls Royce Wraith worth $500,000 was restrained in Operation Nova. Photo: Supplied
The home is jointly registered in the name of a trust and a media personality, who has interim name suppression, who has denied laundering about $300,000 for the gang.

The trust is linked to the lawyer - who also has name suppression - whose $1m family home has also been restrained under the Criminal Proceeds Recovery Act.

The lawyer has pleaded not guilty to eight charges of money laundering $2.4m and participating in an organised criminal group.

Four late model Range Rovers, which retail for about $150,000 each, have also been restrained as well as four Harley Davidsons with personalised number plates like TOKO (Tongan for brother or close friend).

A 2018 Rolls Royce Wraith worth $500,000 was also removed from Tyson Daniels, a senior patched Comanchero, who has pleaded not guilty to money laundering charges.

Police allegedly found $60,000 cash in the study of the Mellons Bay home where Daniels was living.

In total, police took $115,000 cash from four Comancheros including a wad of $5000 Naufahu was carrying. He has also denied unlawfully possessing a pistol.

Among the items seized in Operation Nova were smaller displays of wealth like a $10,000 gold chain and $13,000 Louis Vuitton bag found in the bedroom of Jarome Fonua.

The 24-year-old has also pleaded not guilty to money laundering offences.

The police have alleged the methamphetamine was supplied by the Sinaloa cartel in Mexico.

At the time of the arrests, Detective Superintendent Greg Williams said the Comancheros use wealth to market themselves.

"We are determined to strip them of that wealth that we allege has come from criminal offending, and take the profit out of it."

The raids across Auckland was the second termination phase of Operation Nova, an investigation into the gang, the alleged importing of drugs into the New Zealand and the laundering of millions of dollars.

The first phase of Operation Nova was announced in February with no mention of any links to the Comanchero.

Customs' officers found 5kg of methamphetamine hidden inside cooking appliances, leading police to find another 6kg of the Class-A drug.

Four people were arrested in Auckland; a 50-year-old New Zealander, a 33-year-old Chinese national, a 60-year-old Canadian national and a 19-year-old from the United States.

Four Harley Davidson motorcycles with personalised plates were restrained in Operation Nova. Photo: Supplied
Police believe the methamphetamine was smuggled from the United States, which in turn is likely to have been manufactured in Mexico by cartels.

The Canadian man arrested had a son living in Fiji, where two detectives from the National Organised Crime Group were sent to work with local police.

They found 39kg of cocaine at one address in Suva with a street value of around $20 million.

Then following the Operation Nova raids in April, a New Zealander living in Sydney was arrested by Australian Federal Police.

The 40-year-old now faces extradition over 23 charges for drug importation and supply, participating in an organised criminal group, and money laundering.

Operation Nova terminated about 12 months after the Comanchero publicly announced their arrival on social media.

Wearing the black and gold colours, six members gathered around gold-plated motorcycles in a series of photographs posted online

"All done and sworn in...welcome aboard to my brothers in New Zealand," says the Instagram post by an Australian member of the Comancheros.

"Another Comanchero chapter opened up. We growing stronger and stronger."

The display was a powerful statement - to the police and other gangs in New Zealand - which came a week after the ex-president of the Comancheros, Mahmoud "Mick" Hawi, was fatally gunned down in a Sydney gym car-park.

A New Zealand chapter was "inevitable" following the deportation of 14 Comanchero, Williams told the Herald on Sunday at the time.

They were among the "501" deportees - so nicknamed because of the "character grounds" section of the immigration law used to remove them from Australia.

"It's concerning. Like the other Australian gangs, the Rebels and the Bandidos, we expect the Comancheros will attempt to establish themselves in the drug market within New Zealand," said Williams.

Given some of the extreme violence between rival Australian gangs which can spill into the public, Williams acknowledged the potential for the same to happen here.

"The reality of gang life, whether it's seen by the public or not, is one of violence. When dealing with the gangs, we're finding people with all sorts of firearms," Williams said last year.

"And there is friction when gangs try to move into an established drug market. So there may be [violence] that comes out of this. To date, there hasn't been.

"It will be interesting to see what happens."

A month later, in April 2018, an Auckland man was shot in the head in an execution-style killing on the orders of the Comancheros gang.

Epalahame Tu'uheava and his wife were both shot several times in Māngere.

Tu'uheava, a 28-year-old father also known as Hame or Abraham, died within minutes.

His wife survived by playing dead, despite being shot twice in the head.

Viliami Taani, a Comanchero member described by Yolanda as the "main guy", has admitted charges of murder and attempted murder and will be sentenced in July.